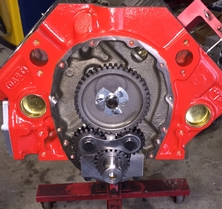 I hear statements like this all of the time; "I run a gear drive because I'd break a timing chain". That's an interesting statement because I've never seen a timing chain break unless something catastrophic happened to the engine. If someone's engine is actually breaking chains, then obviously something's not right. It isn't the timing chain's fault, and it certainly isn't because the engine is "too radical". 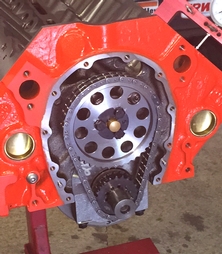 In 99.9% of engines, a good double roller timing chain will endure pretty much everything you can throw at it. If you are really wanting something nice, a billet timing assembly is a nice way to go such as seen in the image to the left. 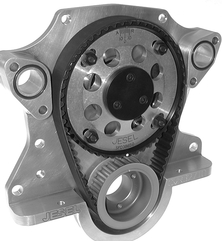 On big, bad to the bone, serious engines making between 1,500 and 3,000+ HP, we use Jesel belt drives, which is a RUBBER belt spinning a cam that has a tremendous load on it with ultra heavy, triple valve springs with three and four times the spring pressures than any basic performance spring, and with cams that have lifts in the .850+" area. if a rubber belt doesn't break, neither will a good steel chain.

Don't get me wrong, there's nothing wrong with running a gear drive if you like the sound of them. We install them on quite a few engines at the customer's request. We just don't prefer them over a chain because  the gear drive "whine" can get pretty old and annoying after a while. We like to hear the natural sound of the engine.

So with that, people that say their 350, 400 or even 500+ HP engine would break a timing chain just seems funny when we have never had a failure with a timing chain in engines making more than twice that amount.