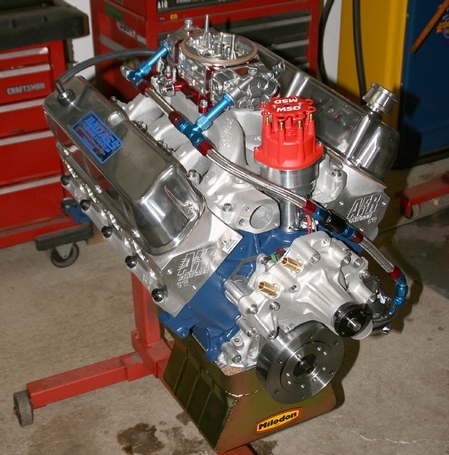 I get countless people asking me what kind of a small block to go with for their early Mustang, Falcon, Galaxie, Fairlane, or Cobra kit car, and there are a few things you need to know before you make any decisions.

These days, everybody and their brother advertises all kinds of small block Ford stroker engines for a whole array of price ranges. For starters, as with anything, you get what you pay for, so stay away from “cheap” prices. No high quality / strong engine parts are cheap, and on top of that, no true professional engine builder works cheap. You pay for their reputation and experience. If you don’t want to pay for it, then go buy one of those mass produced, assembly line made, cheap “hecho en mexico” crate engines and call it a day, but don’t wonder why you get your doors blown-off by someone that has a REAL engine built when the time comes to put the throttle down, or when that crate motor takes a dump on you in a short amount of time. Cheap engines are cheap for a reason, just like cheap tools are cheap for a reason. They are made crappy and weak. Engines are no different. It's all about metal strength, and of course, fit and finish. OK enough on that, time to move on.

Next is size, and this is a big issue. Unless you are building a bone stock car and you want to stay with the exact same size engine that came in that car, you need to consider cubic inches. As the old saying goes, “There’s no replacement for displacement!”. This is where strokers come into play. By building a stroker engine, you increase the cubic inches by increasing the size of the crank. NEVER bore your engine to gain cubic inches, especially on early factory Ford blocks or you’re just asking for trouble. Besides, all you’ll do is “punch out” the block as far as it can go and you won’t be able to rebuild it again because you’ve already bored it as far as you could go. The easiest way to make an engine bigger is to increase the length of the stroke on the crank. This also increases the torque output of the engine, and “torque” is MUCH more important than horsepower in ANY street or street / strip engine. Anyone who doesn’t believe that needs to have their head examined. Trust me, any serious engine builder will side with what I am saying.

Now, there are LOTS of ways to build strokers. Many people on budgets use donor parts from 351M and 400M engines and crap like that. That’s like converting your performance car over to disc brakes using the brakes from a 1972 Pinto. Yeah, they’re disc brakes alright, but don’t count on them stopping you very well because they weren’t designed for performance use, and they simply can’t do the job you want them to do. I see this a lot with people building early Mustangs where they grab disc brakes from an old Granada. Uh hello??? Those brakes were designed for Grandma’s grocery getter, not your performance Mustang! There is a BIG difference in them! Internal engine components are no different.

So let’s get back to size. Should you go with a 331 or a 347? You want my honest opinion? Don’t go with either one of those! Both of those are a waste of time in 95% of the cars out there. I know that is going to piss off a lot of guys that own those engines. Well, sorry. I can’t help it if you didn’t know what to build or buy. This is all part of what the difference is between going to a true pro engine builder that has the experience and reputation for building fast cars, and simply doing the “monkey see – Monkey do” thing like most people do and buy something their friend has, or something they saw at a car show.

Now, some of you are probably thinking 2 things right now; 1) But Arron, I am going to use an after market race block, so MY 331 or 347 will be much stronger than a stock 289/302 block. OK, well don't you think a 351W based stroker using an after market race block is even stronger yet? You have to compare apples to apples here. If you are going to spend upwards of $2,500 or more for a super strong after market race block, then doesn't it make sense to consider the same benifits and gains you'll get for a 351W after market block?  And 2) But Arron, MY 331 or 347 stroker will be using 5.400" rods instead of the short stock rods. Well whoop-de-doo! That's just fantastic IF you're comparing apples to apples again. 5.400" rods are after market rods. The stock 351W rods are STILL longer - which provides a better rod angle with the 351W's taller deck height, and if you really want to make an honest comparison, then consider this; a 351W stroker, such as a 408, 418 or 427 using after market rods have lengths of 6.200" - 6.250"! So you STILL lose by comparison to those 5.400" rods! So how do you like THOSE apples?!! Still wanna play around with that little 331 or 347?

Here’s even more cool stuff about the 351W: It is only 1” wider (approximately), and 1” taller than a 289/302 and almost all of the outer bolt-on’s are the same, from the motor mounts, to the valve covers, to the water pump, to the bell housing bolt pattern, to the exhaust bolt pattern, to the spark plugs, to the heads, rockers, timing cover and so on….. all the same as ANY 289/302.

Put a 289 / 302 side by side with a 351W and take a few steps back. It’s VERY hard to tell the difference between the two. The best part is; it’s a completely bolt-in swap for any early Mustang from 65 on-up, and any early Falcon, Galaxie, Fairlane, Cobra kit car, 5.0 Mustang, or pretty much anything that had a 289/302 sitting in it. Usually all it takes to swap out a 351W with a 289/302 is nothing more than a set of retro fit headers and a low profile air cleaner and you’re good to go. Hedman makes a great set of retro fit headers for early Mustangs, Falcons, etc..

So, without even spending any extra money on expensive stroker parts, a stock 351W has a MUCH stronger block and lower-end, a better deck height, and a better rod angle without even doing a thing to it, plus it is already larger in displacement than both the 331and 347 strokers! Remember that saying? “There’s no replacement for displacement”? Right from the get-go it’s bigger and it’ll make more power, plus it’ll handle that additional power MUCH better (and much more of it) than ANY 289/302 based stroker ever will!

Now here’s an even better part. One of the best all around strokers you can build is a 408 cubic incher based on a 351W block. So consider this, you can either spend all of your money building a weak little 331 or 347 stroker, or you can build a nice 351W and turn it into a monster 408 cubic incher for about the same amount of money, which will absolutely eat-up and spit out the other two on ANY given day!

By the way, a 351W with aluminum heads and aluminum intake manifold weighs LESS than a stock cast iron 289! So for you guys that are into power to weight ratios, you are flonging your dongs playing around with 289’s and 302’s.

So, before you go looking into what you can do for that little 289 or 302, think about how much you are going to spend on building it up and then consider a 351W instead. You’ll be glad you did!