This one has always puzzled me. Almost every muscle car came from the factory with a Holley carb or Carb(s) on it. That includes many of the Shelby's, Cobra's, Tri-Power Vettes, some of the big block Chevelles, Six Pack Mopars, Ford "6V" systems, first and second generation Z/28's, and even motor homes, trucks and commercial delivery vehicles came with factory installed Holley carbs and none of them ever have, or had, any problems. Many of these cars and trucks are still running today, so it would seem funny that Holley's got this bad reputation of always going out of adjustment or needing to be tuned all of the time. That is SO far out in left field it isn't even funny. The image at the upper right shows an original Shelby GT-500 with it's original pair of Holleys on it. Holleys need no more tuning or adjusting than any other carburetor. The #1 issue with ANY carburetor and why they have problems is dirt, either in the needle and seat, which causes flooding, or in the fuel circuits, which cause idling and running issues. Keep dirt out of your carb and you shouldn't have any problems with it. It's really that simple. 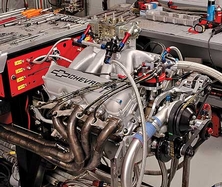 I choose Holley carbs on most of the performance cars and engines I built because they work! What do you see on NASCARs before they went to fuel injection? What did you see on Pro-Stocker's? What do you see on the new Shelby Cobra's from Shelby America? ALL Holley's. GM, Ford AND Chrysler, AND Shelby, AND NASCAR, and all of the million other performance engine and car builder's out there aren't stupid. Ever see a NASCAR have to come into the pits because the carb needed re-adjusting? The image to the right shows a typical NASCAR engine with a Holley carburetor on it when they ran carburetors. 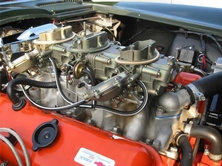 Here's a 427 Tri Power Vette engine with guess what? Holleys on it.

And here's Dodge's version of a 6 pack, with 3 Holleys.

And here's the mighty 426 Hemi with two Holleys on it. 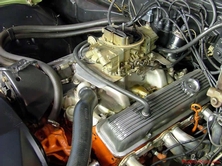 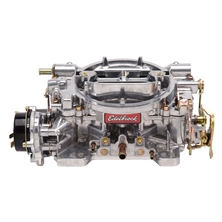 So what about other carburetors, such as an Edelbrock? I am friend's with the entire Edelbrock clan, not to mention I'm Edelbrock's official installation video host, and I can tell you first hand that Vic himself will tell you, for a serious performance engine, you need a Holley. He's not about to pull the wool over your eyes and have you buy one of his carbs for your nasty engine and then not have it run as strong as it could. Sure, an Edelbrock (AFB) carb will run nice, but not AS nice as it could on something that is more serious with a Holley on it. Edelbrock's all about quality and happy customer's. A customer with a carb that just can't cut-it, isn't a good sale for the next items he (or she) may need, not to mention, Edelbrock caters to the masses who have milder engines and cars, not the small group of people who have wild engines in seriously performing cars . Again, don't get me wrong, there's nothing wrong with an Edelbrock carb, which is a re-make of a Carter AFB that is actually made by Weber, hence the WEBER name on the side of the carbs and the "W" markings all over them. For a stock or basic performance engine, an Edelbrock carb is just fine. 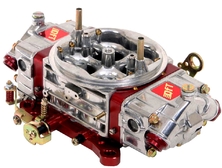 I preferred Holley's, or Holley designed type carburetors such as Quick Fuel Technology, and none of them ever need constant adjusting, just like none of the original muscle cars that came with Holleys needed "constant" adjusting. ALL of the needle and seats in them work similarly. ALL of the floats work similarly, and so on. In fact, carbs like the Quadrajet, Edelbrock (Carter AFB types) and so on are actually much more complicated in design than any Holley is because Holley's don't use things like metering rods and jet combinations, and don't need to be fully disassembled to change things like the needle and seat, an accelerator pump, a main jet, a power valve, etc. It's exactly why race teams and serious cars use them instead of other types of carbs.

The main issue with Holleys having problems is dirt! But this is true for ANY type, or brand, of carb. 99% of the time, the problem guys have with their Holleys is dirt in the needle and seat which prevents it from shutting-off the fuel supply going into the bowl, so what happens is; gas over fills the bowl which causes it to gurgle-up through the vent tube and run down the throat of the carb causing it to flood and run terrible. That's not the carb's fault... it's the owner's fault. It only takes a tiny little particle of dirt to cause that needle and seat to not shut-off, so as the engine is running, fuel flows into the bowl faster than the engine can use it, (most commonly when it's idling), because that needle and seat isn't completely shutting off and it caused flooding, which causes it to run terrible. But again, it's not the carb's fault. Most other brands and types of carbs use VERY similar types of needle and seats and they don't need additional adjusting anymore than any Holley does.