I just can't seem to get the performance out of my car... what gives? 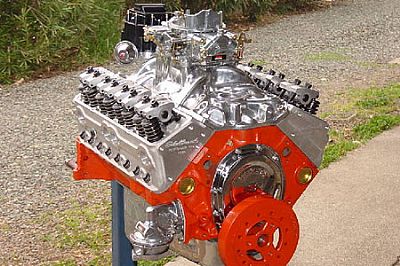 Here's what I ran into quite a lot: someone will buy one of my engines, drop it in their car and expect it to be light years faster than it was before they started without doing any other modifications to the rest of the car to accommodate or "accent" the new power plant, OR... they don't drive it like it needs to be driven.

Certainly any car will be much faster after one of my engines was installed IF all of the right steps were taken to insure that the rest of the car is compatible with the new power plant, AND the car is driven how it is needs to be driven to get the potential out of it.

Here's a couple of quick, true stories that will sum it all up: Back in about 2002 built a 383 Chevy stroker for a local guy's car. He had a 350 in it before that was just so-so. The 383 I built him is the same 383 that I've built many other happy customers and have dynod several of them which made between 475 - 510 HP depending on the variables. His engine sounded great, ran great, and it was built great but I started hearing around town that this guy was saying that his car wasn't much faster now with his new Bad Ass engine than it was with his old one that someone else had built. Then i found-out that he was only taking it up to 4,000 RPM! The solid lifter cam that's in his new 383 engine, and the large volume heads on it don't even start breathing until about 4,000 RPM, so he was barely even getting into the power band before he was shifting to the next gear!

I heard through the grape vine that he was "afraid" to take it out to the 7,000 RPM area that I told him to take it to. Afraid?? Hello??? That's where you HAVE to take it or it won't do what its supposed to do!

You can't expect to buy a performance engine and then turn around and drive it like an old granny and still expect the performance out of it that its supposed to have! You HAVE to know how to drive a vehicle like that or it won't perform at all.

Here's another case in point: it's a whole different ball of wax but the same scenario. Many of you have probably ridden dirt bikes with a high revving, high power 2 stroke engine. I used to race 2 stroke street bikes such as the famed Yamaha RD-350's, the nastier RZ-350, the nastier yet and very rare RZ-500 and the king of street 2 strokes, the Kawi 750 H-2 "triple". Anyway, I sold my RZ-500 to a young guy that wanted a nasty bike, and in 1985, 105 HP at the rear wheel in a 360 Lb bike was pretty impressive. You can't get much nastier than one of those being that it was designed after the 500cc, 200 MPH GP bikes with its similar 4 cylinder, 2 stroke engine in it.

I got a call from this guy a week or so after he bought it and he said it just wasn't very fast, so I said to bring it over and I'd look at it. When he got to my place, I took it for a ride, did a 300 yard wheelie through 4 gears, came back and did a smoky burn-out right in front of him in the driveway! He said he couldn't get it to do that. I told him to ride it down the street and show me what he's doing, so this dork gets on it and goes down the street, shifting gears at about 3,500 RPM. At the end of the block, he turned around and went through the gears again, and at about 30 MPH in 3rd gear, he rolled on the throttle to make the front-end come-up. Well, 30 MPH in 3rd gear is about 2,500 RPM which isn't even close to the RPM he needed to be at. Needless to say, the engine just grunted and bogged-down and nothing happened at all. I told him you HAVE to be in the "power band" or it will fall on it's face. He said he didn't want to rev it that high because he was afraid to. HELLO??? Afraid to??? He should have saved his $ and bought a moped instead!

Look... ALL engines have their power bands, whether they are 4 strokes, 2 strokes, turbine, rotary or whatever. If you don't utilize the engine to make it do it's job, you won't get anything out of it! That RZ-500 doesn't even come alive until about 6,000 RPM, and it will go on up to about 12,000 RPM. This is the same scenario with that guy's 383 I built! He was just barely getting into it's power band before he was shifting into the next gear and lugging the engine back down, let alone his stock suspension, tall rear-end gears and one-legger rear-end didn't help much either!

Again, you HAVE to drive it like it needs to be driven to get the performance out of it or you might as well stay home and save your money. This also goes for accompanying equipment and components on the vehicle. You HAVE to have the right kind of rear-end gears, the correct amount of stall RPM in your torque converter, a correctly set-up suspension and so on to get the performance out of your car. It's not all about the "engine", it's about everything working TOGETHER as a package... including the driver!

Do NASCARs start the race from a dead stop? No! They aren't set-up or geared for that, so they go from a rolling start, just like Indy cars. None of those cars are designed for accelerating from a dead stop. The list goes on and on. Performance is as much about the driver / operator as it is the engine, tuning, chassis set-up and the vehicle itself. If it all doesn't work together, then it's ain't going to perform like it should.

By the way, once that guy finally figured out how to drive, he ran a 12.66 in the quarter mile at 108 MPH shifting his 4 speed manual transmission like a grandma. There ain't a chance in hell that his old, tired, mostly stock 350 he had in it before could have done that.