Do I need to run forged rods and forged pistons? 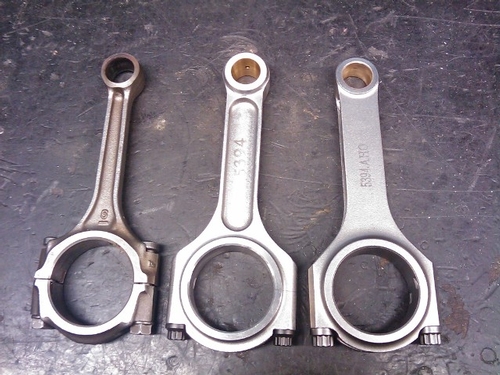 That's a BIG question, and it depends on what you are running and how you treat (or abuse) your engine. Let's start with the rods first. First of all, almost ALL rods are made out of forged steel. Only a very tiny few were cast, which are simply too weak and brittle and would snap in half in anything making any kind of power. With that, most factory rods, (98% of them probably), are fairly strong.

In the older days, we used to polish the beams of factory rods to get rid of "stress risers", and install stronger SPS rod bolts and run them in 500 HP race engines. There have been some pretty high revving factory engines with stock rods too, such as the famed Ford BOSS 302’s, the early Chevy 327’s and the really high revving Chevy 302’s that came in the first generation Z/28‘s. All of which were notorious 7,000 - 8,000 RPM zingers. So with all of those coming off the show room floor with 11:1 compression (or more) and being capable of spinning in excess of 8,000 RPM, it pretty much goes to show that a stock rod (in most cases) can withstand some pretty nasty abuse. These days though, we are making MUCH more power than we did decades ago, and more importantly, much more torque, which is the REAL load an engine sees. And with that, there are much more stresses and loads being put on the internal parts, so sometimes forged alloy steel rods are a better choice for certain applications.

Now I‘m sure most of you know someone that‘s thrown a rod out the side of the block. Well, the truth of the matter is, it usually wasn’t the rod‘s fault at all. Here’s what happens 90% of the time; when the pistons hit TDC they immediately go from an upward motion to a downward motion, so they get "yanked" back down within a fraction of a second. The more RPM you spin the engine, (and the heavier the pistons) the more kinetic energy builds-up in that moving mass which in return, pulls on the rod cap harder and harder. Increasing the stroke is another way of increasing the load on the rod cap when the piston hits TDC, stops, and then turns the other direction again in a nanosecond. Keep in mind too, a stroker also increases piston speed, so RPM for RPM, a stroker is putting even more stress and load on the rod cap when they pistons stops and gets yanked back down by the rod cap because the piston is traveling a greater distance per revolution. By increasing the piston speed you again add to the kinetic energy even more. Those loads are tremendous!

If you took a small sledge hammer and pushed it up in the air as far as you could, and then yanked it back down. You’d feel some serious stress on your arm. Now if you did it as fast as you could, you’d probably pull your arm out of its socket from the built-up kinetic energy from the speed of your arm and the weight of the hammer. Well, the rods and pistons are going through the exact same thing. If you make that sledge hammer even heavier and did it even faster, you would increase the stress and load on your shoulder and arm, and of course, serious bodily injury WILL occur. Well, this same scenario is exactly what’s happening with the rod, which is acting like your arm, and the heavier the piston and longer the stroke, the worse it gets. 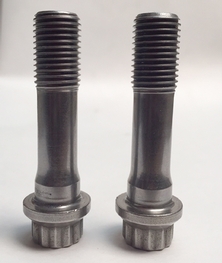 As the piston stops it’s upward motion and then changes directions back down again, the one thing that is taking most of the stress is the rod cap, (assuming the piston is strong enough to hold the wrist pin in place). What holds the rod cap tightly in place? The rod bolts. Bolts are only so strong and can only take just so much stress before they stretch and break. When a rod bolt stretches, it can no longer keep the rod cap tightly in place, and when that happens, the bearing comes loose and you “spin a bearing”. When you spin a bearing, you create LOTS of friction and heat and even more stress which yanks on the rod cap with a hammer-like motion, which eventually rips the cap right off.

Most of the time, the rod cap gets yanked-off when the piston has just hit TDC and starts on it’s way back down again, which in turn, smacks the piston into the head. There go your valves and the piston top! Once the cap gets yanked-off, the piston and remaining part of the rod just sit there at the top of the cylinder until the crank throw swings around again on the next revolution and guess what? It smacks the bottom part of the rod beam hanging down and throws it out the side of the block. So it’s usually not the rod’s fault for snapping. It’s usually due to rod bolt stretch which ends in ultimate failure. 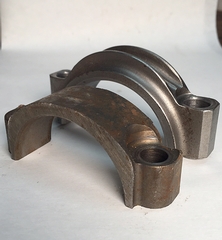 Now, why don’t we just install new, stronger rod bolts in all of our rods and stay with stock rods? We do in mild engines, but in a serious engine making serious power, we always use after market forged rods, because after market rods are made out of a stronger material, and in most cases, they are lighter, which relieves some of the kinetic energy and loads. Another factor is that aftermarket rods have stronger designed caps. They usually have ridges and supports in them to help maintain roundness and shape while the crank is yanking down on it. Look at the image to the left and you can see the difference. The cap in the foreground is what comes on pretty much all modern small block Chevy's. It's one of the powdered metal rod caps. You can enlarge the picture by clicking on it. Notice how it is thin and unsupported all the way around the cap. Keep in mind, you are seeing an illusion that it appears pretty thick because it is in the foreground of the picture, but just know that it is quite a bit thinner than the big, beefy cap in the background. Plus notice the two ribs going across the background cap which adds a LOT more strength and rigidity compared to the stock cap. This doesn't even get into the fact that the stock rods use a stud and nut to hold the cap on, where the aftermarket rods use a through bolt which is usually much larger, (7/16" instead of 3/8"), and obviously MUCH stronger being that it's made out of 8740 steel, or for the better kinds of rods, ARP 200 bolts, or even better yet, L96 steel, and the mightiest of all bolts... CARR bolts. Just to give you an idea, rods such as Carrillo for serious applications use CARR bolts. Where a standard 7/16" ARP bolt usually requires a 63 Ft. Lbs torque, CARR bolts require 100 Ft Lbs!! This is just one of the reasons why serious rods, such as billet steel, cost 3, 4 or 5 times more than the standard aftermarket stuff you see in catalogs and magazines.

So what about the new PM (Powdered Metal) rods that GM is using in their crate motors? Powdered metal is a forging process that takes metal particles and mashes them all together. Kind of like fiber board used in cheap furniture. The problem with this stuff is it’s hard and brittle. Most rods will take a bit of stretching or flexing with no real harm. Hard metal though is brittle and can’t take stretching or flexing because it will snap. PM rods are OK for mild engines, but at high RPMs and under high stresses, they tend to snap. We use factory rods in some mild engines, but we always fit them with super strong ARP bolts to increase the strength of the rod. We also use many types of forged steel rods (5140 steel, 4340 steel, etc) on our more serious engines. It just depends on what the engine is going to be put through. 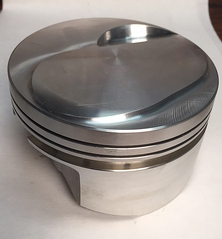 That only covers a tiny fraction of rods and such, but I think you’re getting the idea anyway. Now onto pistons. ALL pistons are made out of aluminum. Most low performance and stock pistons are cast aluminum. There are different alloys of aluminum which all have different characteristics. Hypereutectic pistons are simply a stronger type of alloy with a higher silicon content. Silicon doesn't expand so you can run tighter clearances with these pistons than with others, which helps seal-in the combustion pressure, plus the alloy used in these types of pistons is better than what other cast pistons have so they are stronger than any typical cast piston, but they are still cast pistons, which have limitations to what kinds of stresses and such they can be put through. Some forged race pistons have a high silicon content, while others have a non-silicon content. It just depends on the expansion rate relative to heat and stress levels the piston is going to endure and what that particular manufacturer makes for whatever reason they're making it for. Some pistons need a wide skirt clearance because they expand so much, and others can get away with tighter cylinder wall clearances because the alloy doesn’t expand as much in heat. Remember.. making horsepower is the ability to burn more fuel, which increases cylinder pressure. Burning more fuel makes more heat. As simple as that is, it's a pretty involved subject so I’ll keep it short and simple. Forged pistons should ALWAYS be used in nitrous applications, supercharged applications, serious street performance applications, and racing applications. Cast pistons should be used in stock applications, and hypereutectic cast pistons can be used in most mild street performance applications where nitrous or supercharging isn’t in the future. Just remember, the lighter the piston, the less kinetic energy and stress gets put on the rod cap.

Of course there’s a LOT more to it than that, but this gives you some good insight on it anyway.