My engine burns oil and occasionally smokes, what should I be looking for? 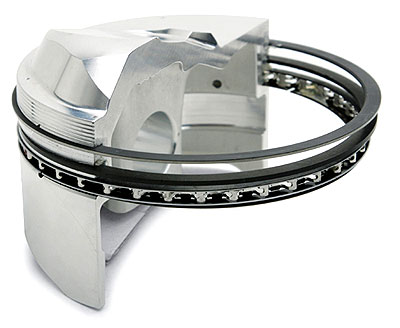 There are many reasons why a certain engine may be burning oil and/or smoking. Let's start with what prevents an engine from burning oil and smoking and work backwards from there. What stops oil from getting into the combustion chamber are the rings and valve seals. When rings are incorrectly installed (upside down, etc.) or the gaps are too wide or the cylinders weren't honed to match the material and/or finish of the rings, oil will get through. The same goes for the valve stem seals. If they are old and hard, they will allow oil to get by and into the combustion area.

New engines WILL burn oil. This is simply because the rings haven't seated yet. You can expect a new engine to burn about a quart of oil the first couple of week or so of running, but that will taper-off from there. On large cubic inch engines, with big bore sizes, it is common for oil to be consumed, even on perfectly good engines simply because of the large surface area of the bores. The more surface area, the more oil is on that surface, and the more it’s apt to get past the rings at any given time. This is also present in crappy built strokers, when short rods are used, which causes piston side loading and poor ring seal. Of course we don't build crappy, short rod strokers, so you would never have to worry about that problem with a Bad Ass engine :-)

The next thing to observe is WHEN it smokes. If it smokes under acceleration, it is telling you that it smokes when cylinder pressures are high, which points at the rings. If it smokes under deceleration, it points at the valve stem seals. A really good symptom when valve seals (or guides) are shot, is when the engine smokes real bad when first started-up in the morning, but them stops smoking shortly after. This is because it takes some time for the oil to seep down the long valve guides, and sitting for several hours or over night allows ample time for this oil to seep down and into the combustion chambers, which would burn (and smoke) upon start-up.

Some seriously high performance engines, and engines prepared for nitrous or superchargers smoke a little all of the time. This isn’t a bad thing and the reason they smoke is because of greater clearances built into the engine to allow for ample area for expansion in the high heat conditions of nitrous and superchargers. Just remember, horsepower makes heat and heat causes expansion. When a supercharger or nitrous is added into this equation, the heat / expansion factor increases even more, so rings gaps need to be widened, piston skirt clearances need to be increased, and so on. Cylinder pressures are much higher in these engines as well, which puts more strain on the rings than they would normally have, which could cause a little extra smoke compared to a stock engine. Stock engine specifications and standards do not apply to serious performance engines. Things need to be “adjusted”. Everything in engines is a “give and take” situation. Any time you “give” in one place, you’ll need to “take” in another place. never expect a performance engine to run and act like a stock engine. This applies to drivability, quirkiness, oil consumption and just about anything else you can think of.