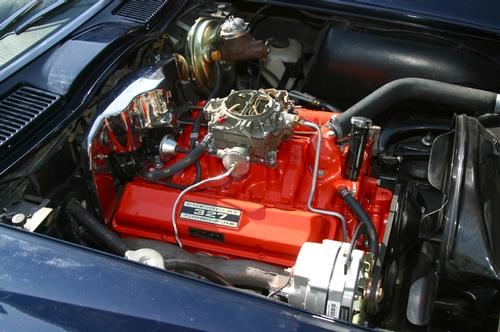 This is a big misconception. First of all, let me repeat the old saying "there's no replacement for displacement". In other words, if a basic performance engine makes say, 1 HP per cubic inch, then it's pretty obvious that a 350, with 23 more cubic inches is inherently going to make 23 more HP than it's smaller cousin, the 327. Both the 327 and 350 have 4" bores. The 327 has a small 3.250" stroke and the 350 has a longer 3.480" stroke. With that, you take into consideration engine physics, and consider that the extra 23 cubic inches of the 350 is all via the crankshaft stroke, and you automatically gain more torque on a logarithmic scale than if it were 23 cubic inches by bore size alone.

Ok then, now you're probably saying; "Well, some of the 327's in the early 60's were rated at 365 HP carbureted, and 375 HP with the Rochester Fuel Injection system, and the 350's didn't make that much power at all“. OK, let's think about that for a minute; The 327 was a popular Corvette engine and the 350 wasn't really available until 1967, (and only in some models of cars in 67), and they didn't start getting popular until 1968. When the 350's did finally come-out in mass numbers, most were in mild cars such as Grandma's big old Caprice or Dad's truck, and they didn't really start getting their "performance" reputation until the 1970 and 1971 LT-1 350's came-out in the Z/28's and Corvette's, so it "appeared" that the 327's were more powerful engines than the 350's. The bottom line here is simple; no matter what you do to a 327, if you do the same thing to a 350, it WILL make more horsepower and torque than a 327 will, period. The same thing goes with ANY engine when comparing cubic inches and power, especially when you are talking about making more torque with longer strokes. Could the 327 rev higher than the 350? Physically, with the shorter stroke and less reciprocating mass than a 350, yes they could if you are comparing apples to apples, BUT because of the heads, cams and valve train limitations, in most cases, revving higher meant absolutely nothing as far as making any power up at those RPM's goes. In all reality, the 350 will rev just as high when using the same, exact components. In the vehicle, it's more of a matter of "gearing" than revs. A 327 with it's shorter stroke would need shorter gears so it can GET to its revs, where a 350, with its slightly longer stroke and more torque output will pull a little taller gear than the 327 will. And keep in mind, most "performance" cars that the 327 came in were things like Corvettes which indeed had shorter rear gearing than your average cars, so they were able to rev quicker and higher than another 327 or 350 in a car with taller gears. Never underestimate the importance of gearing. It is every bit as important as the engine itself. For more on engines revving, see my Tech Tip titled "How high will one of your Bad Ass engines rev?" and that'll explain the subject in even more detail.