Will a 383 Chevy stroker give me big block power in a small block package? 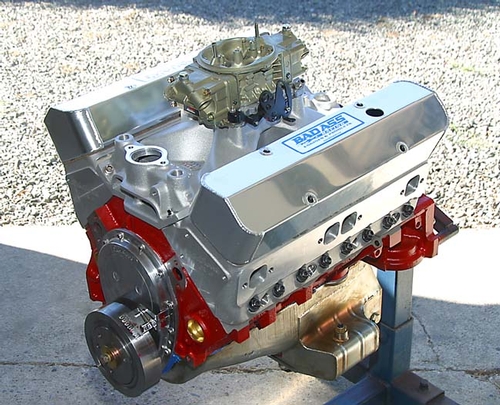 To put it simply, no. This is a misconception a lot of people have, and because of so many bogus magazine ads out there, you see the statement, "big block power in a small block package", and the truth is, you certainly won't get THAT much more power out of 33 extra cubic inches.

Let's use the standard, 1 HP per cubic inch rule of thumb just for the ease of math here. So a .030" over 350 is actually a 355 cubic incher, and at 1HP per cubic inch for a mild build, we would get 355 HP. The same goes for a typical 383 using the same rule of thumb, so we are comparing 383 HP to 355 HP, which is 28 HP difference. Certainly not enough of a gain to give you "big block power". And when you're talking big blocks, you are talking "torque" rather than HP, and it's "torque" that you feel in the seat of your pants when driving around.

So why choose a 383 in the first place? Because the extra cubes are all by stroke, not by bore. Although a 383 might be making the same 1 HP per cubic inch rule as the 355, it will inherently make more torque per cubic inch simply because of the physics of increased cubic inches via stroke rather than bore size.

Stroke means "leverage" and leverage gets vehicles moving, especially at lower RPM's. So even though you might not get true "big block power" out of a 383, you will certainly feel the added stroke in the seat of your pants compared to an identically prepped 355 because the 383 will make much more torque.

Now, if you really want big block power in a small block package, a 427, 434 or even a monster 454 small block stroker will do the trick, but as with any serious stroker of this caliber, you are also talking about a hefty price tag to build one compared to just doing a mild rebuild on a typical big block, or for opting to turn your existing 350 into a 383 stroker.