My head gasket is leaking oil, what can I do?

What you are seeing is most likely one of two things:

1) It's oil, which on most Chevy and Ford engines means it would be coming from the valve covers, or

2) It's water, which could be seeping from the head studs (IF you have head "studs"). Head studs are notorious water "seepers", BUT they are also stronger than bolts (and bolts don't leak). "Usually", on nitrous and supercharged engines, we use head studs. You can easily tell this by looking at the outer edge of the head bolts, and if they have nuts rather than just a bolt head, then they are studs. We don't always use studs though, simply because if the engine bay is real tight for space and you eat a head gasket (which is fairly common when running nitrous or superchargers), it makes it an absolute hell of a job to get the heads off the engine in the car because the heads must be lifted up and over the studs to get them off the block. There's usually a master cylinder and vacuum booster right in the way, or a heater box, etc, where bolts, you simply remove them and lift the head about 3/8" off the block (to clear the head dowels) and they're off.

Now, let me explain something here. It is entirely impossible to have oil leaking out of the head gasket with any typical Chevy or Ford (and many others) V8 push rod engine! If you look at most Ford or Chevy head gaskets, there are ONLY 2 oil holes, and they are WAY up at the top of the gasket, where oil drains back into the "valley" area of the block. This oil is NOT under any pressure at all. It is simply "drain back" oil from the rocker area. There is no oil that comes out of, or back into the block, via the deck surface... period! This ain't rocket science. Look at the image below if you don't believe me.

Now, there were a small few of engines, such as the Ford FE series, and some modern engines such as over head cam engines, where oil is pumped under pressure through the head and up into the valve train. This is especially true with engines that have hollow rocker shafts that fill up and supply oil to the rockers, and again, obviously over head cam engines if you want pressurized oil to feed the cam bearings and such. We're not talking about those types of engines though. Do you see any cars and engines like that on our web site? We're talking about MOST Chevy and Ford, Chrysler, etc, V8's that you'll find us working on. We don't work on imports, or Diesels, or modern engines that "may" have pressurized oil going through the head gaskets, and Ford FE engines are a bit rare these days, so obviously that's not what we're talking about here.

Now, here's why it's impossible for oil to be leaking out of these types of head gaskets, and in some cases, why it can't even leak out of some heads that DO have pressurized oil going through them. Between those two, small oil drain back holes at the TOP of the head gasket, (or usually surrounding the pressurized oil holes), you have 4 VERY large cylinder bores, (that are under massive amounts of pressure and heat), and then you have numerous water jackets that are under normal cooling system pressure (about 12-14 psi). So, how can liquid oil jump across 4 large cylinders, AND across numerous water passages, and then find it's way out of the side of the head and still look like "oil"? It's simple.. it can't! If oil got into the cylinder bores, it would vaporize instantly and make blue smoke out the tail pipe. If oil tried magically jumping across the water jackets, then it would MIX with the water and you would have stuff that looked like a caffe latte on the outside of the block, AND, you would have that same caffe latte substance floating around in your cooling system. Is that what the oil you see looks like? 99% ohe time, no.

I can't tell you how many heated arguments I've gotten into with idiots that have leaky valve covers on typical small and big block Chevy's, Ford's etc, who insist that oil is leaking from between the head and block, and I usually tell them, if that was possible, then monkeys would fly out of my ass too!

Oil flows down hill, and there's no oil above the head / deck surface area (on these types of engines) EXCEPT inside the valve covers. Yes, sometimes you can have a leaky intake manifold "end seal", but you would be unusual to have that oil end-up along that particular edge of the engine. When end seals do leak, oil runs down behind, or along side, the water pump, and down the back side of the engine, but it usually won't end-up along that outer edge. Besides, you shouldn't be using any end seals on your intake manifold anyway. You should only use a bead of silicone, which helps PREVENT a leak from occurring, where end seals can often CAUSE a leak.

Now, if water is seeping out of the head studs, this is fairly common, but it is only coming up the threads (because most head bolt holes go through the deck surface and into the water jackets) and "wicking" it's way out onto that outside edge where the head meets the block. If you didn't know any better, you'd think water was leaking out of the head gasket, but 99% othe time, it's just seepage out the studs. This does absolutely no harm to the engine, and if it bothers you, you can put a small container of Bars Leak into the cooling system, and the seepage should stop.

Now, I get emails from time to time from ding-dong's who say; "You're wrong! My 2.9L Ford leaks oil out of the head gasket!" Well La de dah! What do you want, a Brownie Button or something? Do you see any of those types of cars or engines on my site? Do we build or work on those types of vehicles? Do you think that's what we're talking about on a "Bad Ass Cars" web site?? We're talking about your standard, typical engines used in performance applications like what WE work on. It's sad that I have to even point this out or that some people are dumb enough to think I'm referring to ALL engines. 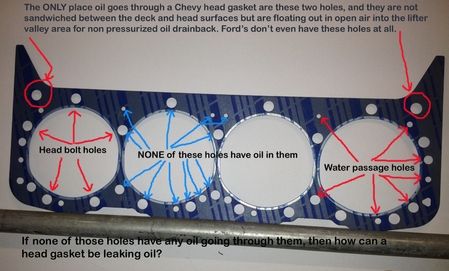