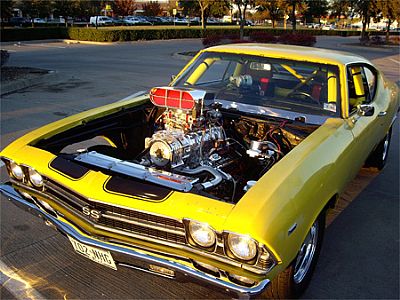 This yellow beast belongs to Robert Hames. We built him the blown small block in it a while back and he is just now finishing the car. Robert had our engine dyno'd and it made 610HP in mild trim on pump gas. Here is what he had to say about us:

Well it WAS finally on the road the other day. The engine screams like a banshee. The 700R4 transmission I HAD got eaten by the motor after about 500 miles. We were messing around and wanted see what it would do. After a modest burnout I tried to launch her w/ M/T drag radials. BOOM! goes the transmission. It was holding together pretty good till the front tires started to lift then it was all over. :-) Before that though we had some street time and highway time. All I can say is that you build a hell of a motor Aaron. With street radials, 50 mph & on the highway, stabbing this thing will burn the tires right off of it. I have never had so much attention to a car in my life. You pull up to a gas station to fill up and people will actually get off the highway & turn around to get a look at this thing. And if it wasn't crazy enough I bought, just for fun, a Tremec TKO 600 5-speed for it the other day. That should be totally F'n insane :-). I am enjoying the crap out of this thing and I live in a neighborhood full of import tuners and not one will even try it. This is my first time with something with this kind of torque. So a few lessons were learned along the way -

Lessons learned. This kind of street HP deserves a lot of respect. And stock components just ain't gonna fly. Blown motors - I am hooked for life! It's not painted yet but here are some photos for you to see and for the site.

Thanks for everything Aaron!
The world could use a few more straight forward, no bullshit builders like yourself. 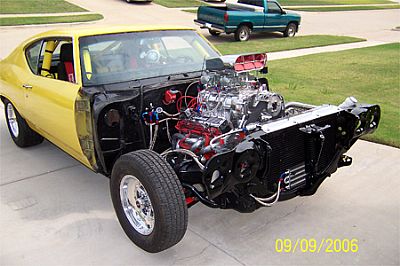 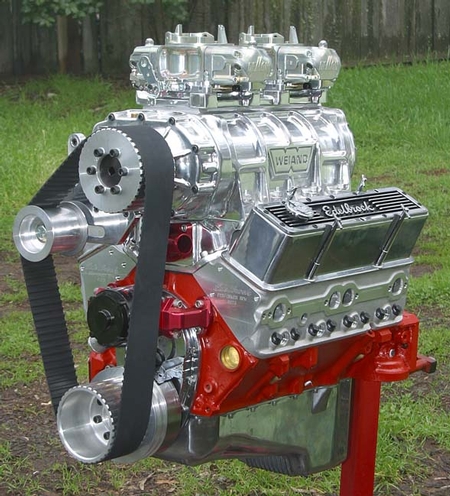