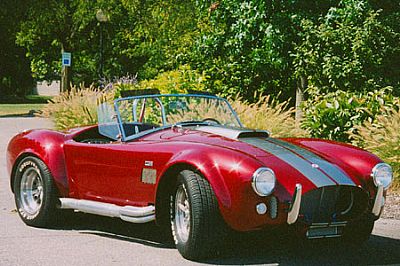 This beautiful Superformance Cobra belongs to Dan Mroz out of Indiana. Dan ownes Mroz Complete Auto Repair in Indiana and has a few toys of his own, including a nice BOSS 302 Mustang. Dan called and enquired about getting a nice, full roller 351W built for his new Superformance Cobra that was more about low-end torque and smooth running rather than top-end horsepower like his BOSS 302, and we granted his wishes. When Dan called after getting it running, he said he could put it in 5th gear at 35MPH and when he nails the throttle, the car pulls right on up, rather than lugging down like most other engines would do. Don't get us wrong, Dan has already had his Cobra at the track and went through a road racing driving school and this engine roars with the best of the best, but downshifting at lower RPM's to get going out of the corners is no longer a mandatory thing, being that this power plant has such low-end "grunt". The engine is one of our "Street Beast" 351W configurations with a few modifications, (which is the beauty of buying a custom built engine) such as 5140 forged steel rods, forged TRW pistons, a custom .531" lift Crower hydraulic roller cam with light weight roller lifters, aluminum Edelbrock heads, a port matched RPM air gap intake manifold, roller rockers and all sorts of other "go fast" stuff. The 5 speed TKO tranny also adds to the driving fun. As Dan says, "it shreds the tires right from an idle, and it get's rubber in all the gears". We're happy he's happy with it!

Two updates on this car;

1) Dan has entered this vehicle 2 times now in the East Coast Cobra Nationals and has taken topo ranks in all classes other than the drag race class whee the 514 cubic inch powered cars simply out-pull him, but ALL of the other classes, this car with this engine combination has taken top place rankings, from the 0 to 60 to 0, to the slolom, to the autocross track, to the longer road course, etc.

2) Dan finally got fed up with the 514 big block cars taking him in the quarter mile, even though this car runs in the 11's, Dan called me and asked what kind of absolute BEAST of a small block I could build, so I built him THE baddest small block, 514 eater motor you could ever imagine, a 462 cubic inch MONSTER small block! Can you say 640 HP on pump gas in full street trim? That's exactly what it dynod at! See pictures below of this beastly "514 eater" small block. Now it's an easy 10 second quarter mile car and THE top contender in the Cobra Nationals! 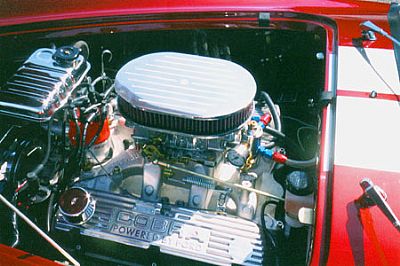 This is the super high torque 351W that did so well in Dan's Cobra for a couple of years... until it was time for the 462 monster (see below). 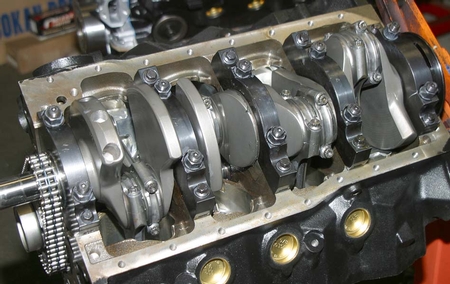 This is the underside of the monster 640 HP, 462 cubic inch small block. It's a World "Man-o"War" race block, with a special built Scat 4340 forged crank with a monster 4.250" stroke. It has 4340 Scat rods and custom made super lightweight forged JE pistons. 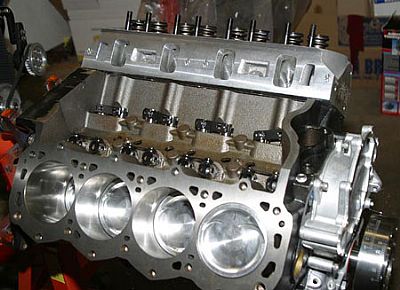 A look at the top side of the 462 beast with the monster JE pistons, light weight roller valve train, etc. These pistons make about 10.5:1 compression with those AFR 225cc heads.

The 514 eating beast just before it shipped to Dan. He is simply going to transfer the outer accessories from his 351W to this 462 cubic inch monster once he gets it.

Dan has had this engine now for about 5 years and it is still running as strong as it did the first day he fired it up. We're notorious for building SUPER strong and SUPER reliable engines. This is just another one of them.