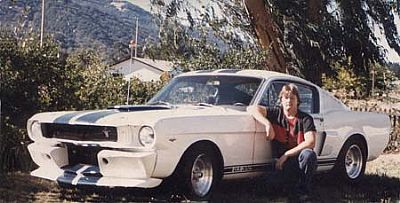 This was another one of my cars back in the early 80's. Even though it wasn't all stock (I added the side scoops and front apron) and I modified it here and there in other areas, it was truly a beauty and handled as well as it went. Keep in mind, Shelby's in the late 70's and early 80's weren't much of a thing. During the gas crunch times of the 70's, the value on almost all muscle cars dropped to an all time low and weren't very collectible. Mine was no exception, plus this car had been wrecked in the front-end and had regular Mustang fenders put on it, hence the "289" emblems on  them, where Shelby's didn't have those. I had far more money on other, not so collectible cars than this car, and their valve at  that time was greater as well. It wasn't until the 90's when the prices of Shelby's and the collectibility went through the roof. Yes, I wish I still had it and that I didn't modify it, but hind sight is always 20-20. I didn't get bored with this one but I did sell it when I got married. It was one of the funnest cars to drive.