Can I install a blower later-on? 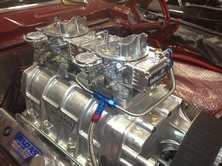 We run into this pretty often where someone will want us to build a blown engine but the cost for the blower and additional carbs isn't in the budget at the time, so they want us to build the engine "set-up" to add the blower later. We try to discourage this for several reasons;

1) Most guys have never been in a car with REAL horsepower. They've been accustomed to being TOLD their buddy's car has 500, 600, (or whatever he was lying that day about how much power his engine makes), so when you go for a ride in his car that he claims has 600 HP and it really only has more like barely 400 HP, you get used to the feeling of what 350 - 400 feels like. An honest to goodness 600 - 700 HP is a serious handful in any given street car. When we build an engine that honestly makes that kind of power, it's a butt puckering experience for most people, and in most cases, it's a car that'll easily peel-off a 10 second quarter mile time. Now really, how many of the people have you talked to that claim they have that kind of power but when they get to the track, they run 12's, 13's or 14's? It's simple... it's because they just aren't making the kind of power they claim they are making.

2) It's not uncommon for us to build an engine destine to have a blower added later (or nitrous), and once the customer gets it he is more than happy with how much power it makes without the blower, so they never spend the additional funds to follow through with it. This creates an engine that is looser than we would have built if it were designed to be naturally aspirated. A naturally aspirated cam profile isn't ideal for a non-blown application, nor the static compression that we would have chosen for a naturally aspirated set-up, and even things like head gaskets we would choose for a blower application are different. So in a sense, when we've run into this before, even though the customer may be tickled pink with how strong it runs, it is still an engine that is going to smoke a bit more and use a bit more oil than one that wasn't set-up for a blower, plus it isn't making the power it COULD be making if we had originally set it up to be naturally aspirated.

The opposite is true when someone wants an engine built and then later-on (without us knowing) wants to add a supercharger. You are really limited in what you can do. To get the kind of power and performance that we get from our engines, they are built to run on the edge of what today's fuel can handle. If you go spending $4,500 or so for a nice blower set-up, and more on additional carbs, linkages, fuel lines, etc., you are going to be very limited in how much blower boost you can run, so basically you just spent a bunch of money for something that looks neat but can't function the way it is designed to. This doesn't take into account the naturally aspirated cam profile, which will send a good portion of that boost right out the exhaust, doesn't add to making any more power. This also doesn't get into the types of parts used in the engine, such as pistons, rings, bearings, clearances, etc. There IS a difference between blower pistons and non-blower pistons. Pistons designed for blowers and nitrous have more area above the top ring for added strength. Plus the fact that the rings will see more temperature under boost conditions so we choose a different type of rings for those too. 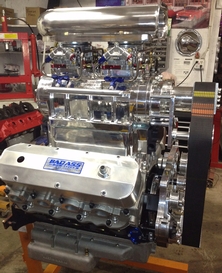 Blowers (or nitrous) force the engine to burn more fuel. Burning more fuel creates more heat. Heat expands parts, so if clearances aren't specifically built-in during the engine building process to be compatible with a blower (or for nitrous) and those parts get heated up beyond what they are normally exposed to, that means clearances disappear too and things weld themselves together from friction, rings butt together and break, and can also bust-off the piston tops above the ring land. Not enough piston skirt clearance and piston skirt friction causes them to weld themselves to the cylinder walls. Bearings fail because they can't take the loads caused under boost conditions, and all kinds of other bad things can (and will) happen. This is why we laugh at cheap priced engines advertised in magazines that either don't have specific parts that are blower friendly, or that are basically regular engines with blowers stuck on top of them. You're just asking for a failure if you put some boost to those types of engines.

The thing to remember is; if you want a blown engine, build it as a blown engine with the blower ON IT, because when you don't, or if you decide to not put the blower on it down the road, the engine won't be built as well, or run as well, as it would have if we had set it up to be naturally aspirated from the beginning.