Firing an engine up that's been stored for a long time 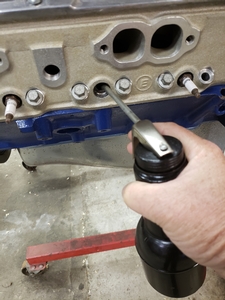 Some people run into a situation where they purchased a car (or an engine) from someone that has been sitting for a long period of time and aren't sure what to do in order to fire it up. It's a good idea to know whether the engine has been fired up before or if it is new and has never been fired. In either case, put a new oil filter on it and fill it with fresh, new oil.

The next step is pretty straight forward. Remove all of the spark plugs, and using a squirt can, shoot about a tablespoon of engine oil into each spark plug hole. Once this is completed, gently rotate the engine BY HAND a few times to help re-coat the cylinder walls with oil and to make sure it actually turns over and doesn't have any other issues. This can easily be done by using a socket and ratchet on the harmonic balancer bolt. I always recommend rotating the engine in the direction in which it spins when it's running. Usually this is clockwise if you are standing in front of the engine looking at it from the front. So just pretend you are going to tighten the harmonic balancer bolt and you'll be going in the right direction.

While you're rotating the engine, listen for odd sounds, (clunking, scraping, etc.) and use your sense of touch to FEEL for any problems through the wrench that may be there but aren't making any audible sounds, such as tightness, then looseness, etc. New engines will have a little bit of scrubbing sound because of the rough finish on the cylinder walls from the honing process as the rings moveover it. This is normal. An older engine that has been ran before will feel smoother. Once this step is done, check the gaps of the spark plugs (they'll probably need to be around .035" gap) and re-install them.

If this is a new engine, do this next step. If it isn't a new engine, then you can either opt to do this step or just skip over it. Get yourself an oil priming tool. These are cheap and they are easy to use. Most auto parts stores and pretty much all mail order houses have them. You might even know a buddy that has one that you can borrow for a few minutes. Once you have this tool, find TDC (Top Dead Center) on cylinder #1. This is easy. Just remove your #1 spark plug (the front driver's side on Chevy's, or the front passenger side on Ford's) and stick your finger over the spark plug hole. Now rotate the engine BY HAND in the direction it turns when it's running and when you feel and hear air pushing past your finger, keep rotating it until the air and sound just stops. Now look down at the timing mark and continue to rotate the engine a few more degrees until the marks are at "zero". This is TDC on cylinder 1.

Now, remove the distributor cap and see where the rotor is pointing. Mark the terminal on the cap that the rotor will be pointing to when the cap is set back on. That is sparkplug terminal #1. Once that is marked, note where the rotor is pointing so when you drop the distributor back-in, you can point it back where it was (unless you want to have #1 in a new location, which is fine too).

Once you have completed this step, remove the distributor. Now drop the oil priming tool into the distributor hole and attach an electric drill to it and rotate it in the direction that the rotor spins when the engine is running (clockwise for GM's, counter clockwise for Ford's). You'll know when oil is flowing through the engine because the drill will lug down. Do this procedure for about 30 seconds or so. This will run fresh engine oil all through the bearings and up into the cam's oil galleys. When you are done, re-install the distributor. Keep in mind though, you just rotated the oil pump drive so the disributor probably won't drop back in with the rotor pointing the the same location as it was before you took it out. This is OK. Simply use the oil priming tool again to rotate the oil pump drive by hand a little at a time until you can drop the distributor back in with the rotor pointing where you wanted it to point.

Once the distributor is back-in, set the cap back on and line up the #1 spark plug terminal with where the rotor is pointing. Once that is done, rotate the distributor cap about 1/4" - 3/8" in the OPPOSITE direction the rotor will rotate when the engine is running. This will pre-set a little advancement in the timing so the engine will fire up easily. 1/4" - 3/8" is about 12 - 15 degrees of advance on the crank.

These are the basics of it and should help you get that engine fired safely. If it doesn't fire right up, DO NOT just keep cranking on it!! It should fire within a few seconds. If it backfires through the carb or spits flames, it is either the timing needs to be advanced a little more or your spark plug firing order isn't correct.  Check those again and try firing it again. Just remember, cranking and cranking on an engne WILL cause damage. You can eat-up bearings, flatten a cam and do all sorts of things that you won't like, so take your time, check and double check everything and you shouldn't have any problems. As SOON as it fires up, make sure you have oil pressure. if you do, now is the time to set your timing, adjst the carb, etc. If this is a brand new engine and it has a flat tappet cam in it, MAKE SURE you do the proper cam break-in procedure or it WILL go flat and you'll have an expensive mess on your hands.