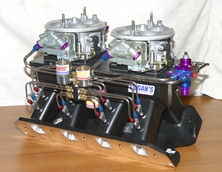 There are certainly a fair share of myths and misconceptions about nitrous floating around out there, and questions about its reliability, the tuning needed, etc. I've been building nitrous engines since the early 80's and have ran everything from hidden little systems for cheating at races, to monster 600 HP 3 stage shots. Let me take a moment to share a few basic fundamentals about this awesome power adder and help set the record straight.

Nitrous IS cool and best of all, it flat out WORKS! On carbureted engines, nitrous is a stand alone system. In other words, you don’t have to do any carb jetting or tuning. The engine runs exactly as it does before you install the system. When you activate the nitrous, it takes care of itself. The only thing you will need to do is back the timing off 2 degrees (for about a 75 - 100 HP shot) and switch to 1 step colder spark plugs with NON-extended tip electrodes.  Extended tip electrode spark plugs "can" become glow plugs from the added heat and cause pre-ignition, which can end in catastrophe when nitrous is in use.

When you buy a nitrous kit you ALWAYS start off with the smallest jets they give you and work your way up from there. This is for several reasons;

1) If there IS a problem with the system (a clogged fuel line, incorrect fuel or nitrous jets installed, etc.) then it's better to find out with a small shot and not have anything go bad than it is to find out with a big, healthy shot and have a total and complete catastrophe.

2) You don't know how much power your tires can put to the ground before they break loose and send the car out of control. You ONLY want to use the power gain that your rear tires can handle. You go sticking a 150 HP shot on a car with small or stock tires and you hit the nitrous at 45 MPH you'll break the tires loose and spin the car around ass backwards and get hurt, or worse yet, hurt someone else. I see this all the time with rookies at the race track that put a 250 HP single stage shot on their semi-stock Wednesday night drag car and when they hit the nitrous, all 250 HP hits those rear tires instantly and blows them off, which in turn sends the car completely sideways and sometimes into the wall. This is why there are 2 stage and 3 stage systems.

On a larger 2 stage system, such as a 300 HP shot, when you hit the nitrous button it starts off with 150HP, then adds the second 150 HP a moment later. This keeps the tires from getting too much power all at once and prevents them from blowing off. You can control how long the time delay is between the power gains by an electronic controller. I don’t recommend going over 150HP - 175HP on a single stage system unless you are running slicks on the track. Anything 200 HP or above should probably have a 2 stage system.

Now, if you go sticking a 200-300HP shot on any typical stock engine, expect it to go Ka-BOOM! A stock engine would do the same thing if you put a turbo or supercharger on it and gained an additional 200-300 HP. Stock components simply can’t take the loads, stresses and heat of an additional 200-300 HP gain, but idiots try it anyway and then blame the nitrous for "blowing up their engine". It wasn't the nitrous' fault, it was the stupidity of the user. This doesn't even get into the issues with clearances. Nitrous allows you to burn more fuel. Burning fuel creates heat. Heat expands metal. Stock clearances are too tight to handle such heat and expansions. When you heat the internals up too much, the clearances get too tight and bad things happen. That's just because it's a stock engine. It wasn't designed for nitrous, or at least not a healthy shot of nitrous anyway.

It's simple, nitrous is chemical oxygen set-off by heat. It's basically a chemical supercharger. Instead of a supercharger grabbing atmospheric air and compressing it into the engine where it mixes with duel, nitrous shoots-in at about 900 psi and expands with oxygen when it hits the cylinder heat. At 550 degrees it releases oxygen much greater than atmospheric oxygen. Oxygen doesn’t burn but you need it for combustion to take place. This is why nitrous systems also have fuel jets and a fuel solenoid (on wet systems anyway). As the nitrous goes in, so does more fuel. The fuel is measured and regulated by the jet size which is relevant to the nitrous jet size. This is why you don’t need to do anything to the carb or any other jetting. The nitrous system takes care of the additional fuel all by itself.

On a "dry system" for EFI cars, you don't have an additional fuel solenoid because as soon as the nitrous goes into the engine and hits the O2 sensor, it tells the computer to throw more fuel at it and it automatically delivers the additional fuwel needed to maintain a good air/fuel mixture. Of course this is only true for mild to moderate systems. You can certainly over ride the capabilities of an EFI system by trying to run too big of a shot where the EFI system simply can't deliver enough fuel. That's when you need additional fuel injectors & fuel pressure. It's common for hard core race engines have 2 banks of injectors to make sure enough fuel is delivered while the nitrous is on.

Just remember... all nitrous does is add chemical oxygen which allows you to burn more fuel, period. Burn more fuel and you make more power. It's that simple. The problem is; internal combustion is MUCH different than external (atmosphere) combustion.

If you throw a teaspoon of gas on the ground and light it, it'll burn. Toss a bucket of gas on the ground and it'll burn too, just bigger, hotter and more dangerously. You can’t do that with internal combustion. If you over richen the fuel mixture, it doesn’t burn very well. Add too much fuel and it won’t burn at all. Nitrous systems regulate the amount of oxygen and fuel so internal combustion can take place. This is how an engine can burn more fuel than it can suck-in through the carb, and why nitrous can make the engine produce so much more power. It isn’t the nitrous itself burning. Nitrous doesn’t even burn. You can put a match out with it.

Have you ever lit an oxy / acetylene torch? Can you light it with just the oxygen on? NO! Oxygen doesn't burn. You need to light the acetylene first (the fuel portion) and THEN add the oxygen to get the flame and heat you want. What happens when you add the oxygen? The flame turns blue and gets hot. Nitrous does the same thing with fuel inside the cylinder. Too rich, it burns cold and inefficient. Too lean, and just like that torch, it burns blue hot and will melt steel. The trick is to jet it in the middle of the road to control temperature so it burns the fuel nicely without being too cold or too hot. Nitrous kits come with a jetting map to show you exactly what fuel and nitrous jets to use so there is no guess work. Follow their instructions and you won't have a problem. If you aren't an experienced expert and you start dicking around with the jetting though, you're asking for a serious engine failure.

The worst thing you can do with a nitrous engine is lean it out. Just like that torch, add too much oxygen and the flame gets really hot and will melt steel. Your aluminum pistons don’t stand a chance at that point. Nitrous will never hurt your engine or "melt it down" if it is used properly and moderately.

On a typical performance built V8, start with a 75 HP shot, then move to a 100 HP, then to a 125 and then to a 150 HP. Most stock engines will handle up to a 100HP shot. It's safer to stay with a 75HP shot though, especially on an engine with quite a few miles on it. Most performance built engines will handle up to about 150 HP shot just fine, but don’t go beyond that unless you set the clearances inside the engine along with the ring gaps for nitrous use. Performance engine "components" are usually strong enough to handle a 250HP shot, but if the clearances are not set up for that kind of a nitrous shot, you are asking for a problem.