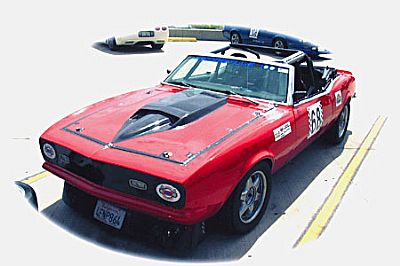 This road race 68 Camaro belongs to Jon Peters out of Mt. Shasta, CA. We built him a very reliable, high torque 383 small block with all forged, and roller internals for this beauty. It has been clocked at over 162MPH and as Jon put it, "If I had an extra gear, it would go even faster, cause it's got plenty of power, just not enough gearing". This car has been one the top 3 contenders in just about every race it's been in. Jon complains that his trophy shelf broke because he had so many on it from the winnings of this car.

The engine went 2 full hard core seasons of racing, and mind you, he DRIVES the car to the tracks, such as Thunder Hill, Nevada's Bonneville 100, Willow Springs, The Silver State Classic and so on, then he wins, and drives it back home. There's pretty much nothing "Camaro" under the mostly fiberglass body though, it's all tube chassis and Jon does all the work himself. Jon brought the engine back (even though it is running in tip top shape) so we could wake it up a bit more by adding some more power to it. His plans are to increase the gear ratio and get this car into the 180+ MPH area, "reliably". As soon as we have pictures of the new set-up, we'll post them on the site for you to see. 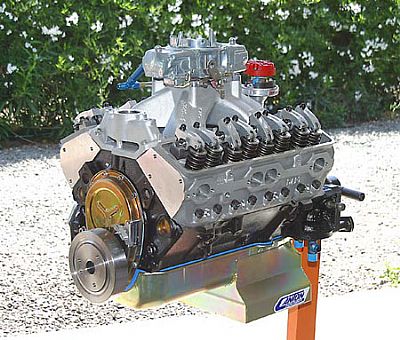 This is the newest power plant we built for it. It's a 383 with about 10:1 compression. A 4340 crank and rods, a healthier solid roller cam, fully CNC'd Dart Pro-1 heads, Jesel shaft mount rockers, etc. It'll be every bit as reliable as his old 383 we built for him, but with much more raw power. This little beast now has the power to pull the taller gearing which will put this top contender into the 180+ MPH class.