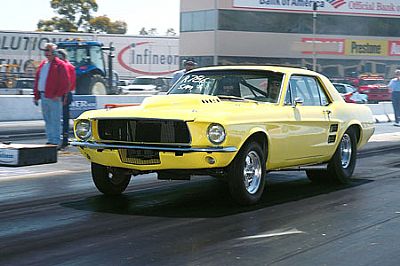 This 67 Mustang belongs to Rich Pedraza, a local racer that had a 347 with nitrous that went south on him. Rich did all of the work on this car himself, including tubbing it and setting it all up. He brought the smoked 347 in for me to go through, so I tore it apart and found everything from cracks in his block, to melted pistons, to a cam that was wiped out, to a head that was melted between the cylinders, and lots of other bad things.

I started with a fresh 302 block. I fully machined and clearanced it, freshened up his existing 4340 crank & H beam rods, installed a new set of JE pistons, Total Seal rings, a new roller cam and all sorts of other goodies to make this new 347 a true screamer.

The first time out it ran an easy 11 second pass in the quarter mile (without any nitrous) and left the line harder than it ever had with the old 347 in it. Now it runs consistent 11's in the "Sportsman" class, plus he drives this yellow beast on the street! It's as comfortable in traffic as it is at the track, and it runs stronger than ever without the use of nitrous. For a mild little pump gas 347 in a car that cruises on the street, this little 347 powered 67 'Stang is one mean machine!

This car ran in the 2010 "Drag Week" across the United States and did VERY WELL. No hick-ups, no troubles, and it ran time after time at each drag strip along the way, then drove safely home. 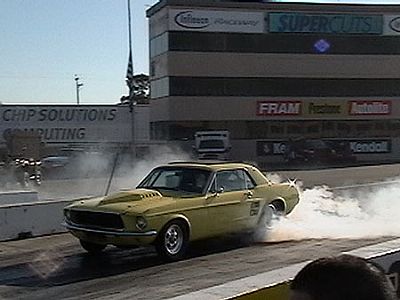 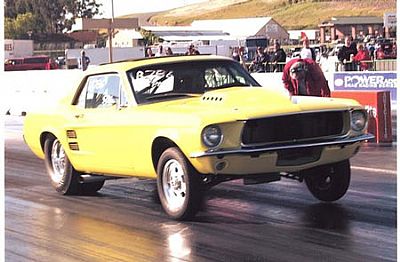 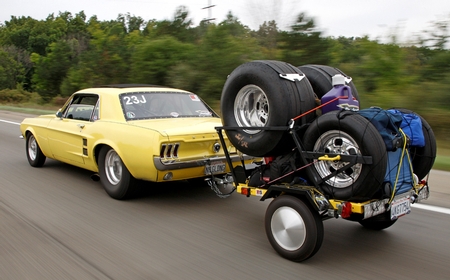 Here is Rich, somewhere in mid USA, cruising down the highway during Drag Week on his way to the next destination. The car ran strong and flawless with the hot little 347 stroker we built for him. We wouldn't expect anything less from one of our engines.