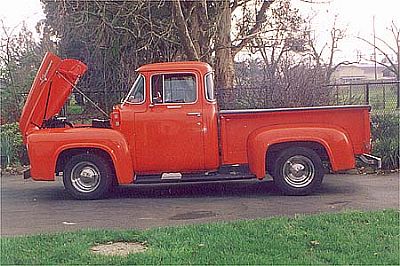 This is Lloyd Griffith's cool '56 F-100 daily driver. The Chevy 327 and 3 speed that was in it got tired so Lloyd brought it in for a new power plant. It needed a Ford engine in this Ford truck so we built Lloyd a nice little late model 5.0L engine with mildly ported heads, and lots of other goodies to upgrade it from stock, plus a new 4 speed conversion. The frame got boxed-in while it was here as well to help stiffen the flimsy stock frame.

We built the engine in this truck way back in the early 90's and Lloyd still drives this truck every single day as his commuter vehicle to and from work. You just don't see generic crate motors running that long. When you need an engine for your ride, think about what you'd rather invest your money into... a generic crate engine, or a high quality, custom built engine that'll last, and last, and last.

Since then, we also converted this truck over to a 5 speed transmission and front disc brakes. The engine is still running strong.