I want a Bad Ass engine to make my car faster, what should I run? 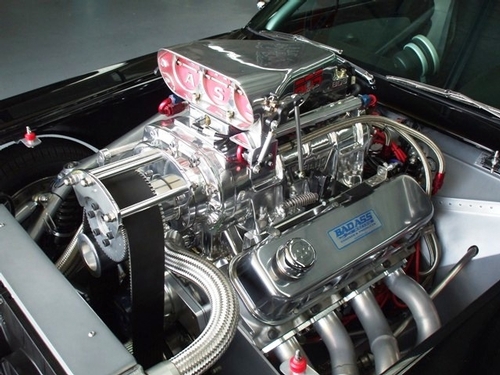 A car’s performance isn’t just about the engine. Sure a more powerful engine will obviously make your car faster and quicker than it was with a bone stock engine in it, BUT… just dropping a healthy engine into a car doesn’t mean you’ll get the performance out of the car (or the engine) that you’re looking for unless you also make other changes.

Imagine this; take a 9 second drag car. Yes, it requires a healthy amount of power to propel a car down a quarter mile at a 9 second elapse time and speed, but there is more to that car than just the powerful engine! If you took that car are removed the low rear-end gears (probably 4.56’s or 4.88’s) and replaced them with what most stock street cars have, (probably 3.00’s or 3.25’s), that car just lost about 2 seconds off it’s time! If you remove the high stall converter needed for that car to launch in it’s power band, (probably a 5,000 or so RPM stall), and replaced it with something a typical street car has, (probably in the 1,200 – 1,400 RPM range), then that “powerful engine” can’t get up INTO its power range at the higher RPMs it needs to run in to propel that car so quickly and fast down the track, so deduct another second or so off that time. Now with just the motor, minus the gears and high stall converter, you just took a very quick 9 second car and turned it into a mediocre 11 or so second car. This doesn’t even get into the trans brake, or the front and rear suspension needed to transfer weight to plant the tires hard enough to launch that car hard.

My point is; just sticking a powerful engine into your car without also doing other VERY important things so that engine can get your car to perform, such as lower rear gears, a higher stall converter, a better exhaust, some suspension mods, etc. won’t get you the overall performance that you are looking for. So yes, we’d LOVE to build you one hell of a BAD ASS engine for your car, BUT you HAVE to do other mods and additions to get the potential out of that engine so the car will perform as it should. The good thing is we are glad to help you with what you’ll need to get the most out of your car AND new engine, whether it’s a street car, a drag car, a road racer, truck, a boat or whatever you happen to be building. We won’t “just” sell you an engine that you THINK you might want just to make a sale and leave you hanging. We’ll build a custom engine designed specifically for your car and driving needs, AND we’ll help make sure you know what else to do to get the best overall performance you can get. Our reputation relies on you being happy and your car absolutely kicking ass so you’ll go out and brag about! That means other’s will give us a call and we get more business. It all comes around! When you’re ready for a truly Bad Ass engine AND car, let us know and we’ll set you up!