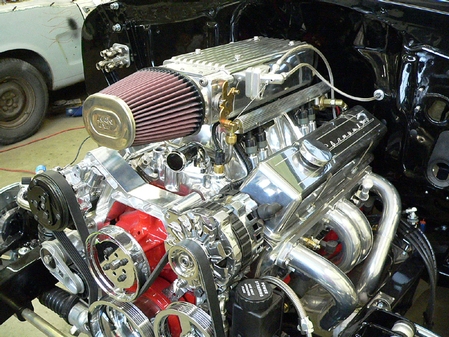 So you have an 80's, 90's or early 2,000's Chevy car or truck and you want an engine built that makes more power. We can certainly build you an engine that’ll do everything you want it to do, and then some, but we have to work backwards on what will restrict us.

First; It’s a smog vehicle, which means it needs to be smog legal, unless you are in an area that doesn’t require smogging it. If it has to pass smog, you will be stuck having to use all smog legal parts, none of which allow for making much power.

Secondly; You probably have a TBI EFI system. Those “can” be made to work with more powerful engines, but with a stock computer, you are stuck to stay within its fuel delivering capabilities. Sometimes you can add a chip that will help, and there are some “on the fly” flash tuners out there that allow you to increase and decrease the tune with the push of a button on the tuning unit. With one of those it makes it a little better and easier to adjust the tune to support a healthy amount of power. You can’t make power without delivering & burning fuel.

If your car has one of the TPI EFI system on it, such as a late 80's / early 90's Camaro or Firebird 305 / 350, those are THE worst thing you can have when you are talking about adding performance components, especially healthy cams. The TPI EFI systems use a vacuum signal to tell the fuel pressure regulator whether the engine is idling, running down the road, or accelerating. When you add a "healthy" cam, the "sound" of the cam is caused by the profile of the cam. Mainly "overlap". Overlap is what gives a cam its "sound". It also affects the idle vacuum signal. The healthier the cam, the less idle vacuum it'll have. A stock engine will usually have an idle vacuum of 16 - 18 inches. A healthy cam may only have 10 inches or so. Sometimes a little more, and sometimes a little less. Either way it is substantially lower than a stock cam. The vacuum sends a signal to the fuel pressure regulator which controls the fuel delivery. The low signal fools the regulator into thinking that the engine is accelerating so it dumps fuel when it isn't supposed to. Doesn't sound like too much of a problem except for the fact that the regulator thinks this while you are just sitting there idling which causes the engine to run WAY too rich. It'll hunt and peck looking for an idle and will be puking, sputtering and having a hard time idling. You can't make good power without a cam that has a profile designed for increasing power. When you do this on TPI systems, the low vacuum signal IS going to give you troubles, so you REALLY have to be careful by not choosing much of a healthy cam, which limits you on how much power you can make.

TBI EFI systems, such as what most cars and trucks had after the TPI systems disappeared, use early technology for controlling fuel pressure & delivering fuel.  Again, adding a healthier cam cuts the idle vacuum signal down, and increases the idle RPM, which in turn confuses things like the computer, the fuel pressure regulator, MAP sensors, etc. These systems REALLY limit you on what you can run. Ford vehicles use a MASS Air system that doesn't have this problem, so you aren't limited with a Ford vehicle like you are a GM. So with EFI systems like what GM uses, you are limited in how much cam you can run or you’ll end-up having an engine that chokes, pukes and won’t want to idle or accelerate off an idle very well.

Don’t get me wrong, there are lots of ways to make a vehicle like this get-up and go, but you have to be careful in selecting what you can, and can’t run, otherwise you can really shoot yourself in the foot and have a great big mess on your hands that won’t pass smog and won’t be able to get out of its own way. There just aren’t any smog legal parts (heads, cam, intake manifold, etc.) that make much power.

Now, there are several things you can do. First and foremost, there is no replacement for displacement! Increasing the cubic inch size of your engine will definitely help in the power department, AND it is something a smog tech can not see to fail you on a visual test. You can opt for a 383 stroker, of if you really wanted to get-up and go, you could flip the bill for an after market block (something 99% of smog techs won’t look at or find) and increase the cubes to 427, 434 or even out to 454 and still look like a stock engine. Building anything on an after market block is a bit expensive because the bare block alone will run in the $2,000 - $2,500 area, plus the big stroker crank, the long rods and much larger pistons add a considerable amount of cost over a typical stock or mild performance rebuild of a basic 350 engine, but that’s the price one pays for making power.

A well built 383 stroker, based on a standard 350 block with some good components in it to emphasize on TORQUE rather than high-end horsepower is probably the best way to go. Even with that, you are looking at a minimum of about $8,000 - $9,000 for a nice, aluminum headed, full roller, big balls torque 383 stroker (built with quality components in it). Yes there are definitely “cheaper” 383’s out there, but you get what you pay for. When that “cheap” 383 takes a dump and leaves you with a pile of useless parts and an engine that now needs yet another entire rebuild to do it RIGHT the second time around, it IS going to cost you 3 times more money than just doing it right the first time. A “cheap” engine build ain't worth a crap when it takes a dump on you. You didn’t save a thing, and in fact, you are out WAY more money, time, and effort to do it all over again the right way. This is why we set standards for what we will, or won’t build. We don’t build “cheap” engines, which is why we have a reputation for building engines that make big time power that last a long, LONG time. You get your money’s worth with us.

Another option is to build a strong replacement 350 and utilize a power adder such as a small shot of nitrous oxide, which is perfectly safe for your engine and is street legal, contrary to what people say who obviously have no clue what they are talking about. The good thing about this is that it can run independent from your existing TPI system so you don;t have to worry about fuel pressure, fuel volume (starvation), manifold vacuum, etc. Nitrous doesn't really care about any of that because a typical "wet system" is a stand alone system that does everything on its own, including its own fuel delivery.

A supercharger kit might also be an option, BUT primitive TBI computers may not like it as well as you had hoped, which is why you don;t see too any supercharged GM vehicles. A centrifugal supercharger such as a Vortech, bolts-on much like an alternator or an air conditioning compressor. It sits off the side of the engine and blows pressure into the EFI inlet. The EFI system (if it is working the way it should) sees more air so it compensates with more fuel. More air and fuel burned = more power. You can expect an easy 80 – 100 HP and at least that much in raw torque with zero maintenance for tens of thousands of miles with a supercharger like that. The down side is that the kits cost a bit of money. You can expect to pay about $3,500 - $4,000 or so for a bolt-on kit, and it takes a good day or so to do an install, BUT it is on-demand REAL power 24/7!! Mash the gas and GO! When you are off the gas, it'll run like a stock engine. This really is the ultimate way to go and some TBI sytems will work fairly well with one.

I think the best bang for the buck / all around way for “on demand power” is a small shot of nitrous oxide. A typical street kit runs about $600 or so and it takes about 6 hours or so for an install. A small, SAFE shot of nitrous will NOT harm an engine, and it's real, kick in the pants fun to play with! A 50, 75HP shot is 100% s for stock engines. Even up to a 100 HP shot is safe for most stock V8’s. This safeness gets compounded when you set the engine up to be nitrous friendly, (which we are experts at), so it REALLY increases the safety of running it. With a flip of a switch to turn the bottle on, and a mash of the gas to activate the system, you’re off with an additional 50 – 100 HP’s worth of acceleration. When you aren’t using it, you are basically running around on a stock trim engine, so it only affects it when you have it in use. The down side is that it is fun and it works, which means you WILL be playing with it a lot, which means you will be draining the bottle dry and will need to have it refilled often. Keeping a spare bottle around is a good way to make it easier when a refill is needed, and increasing the bottle size will extend the amount of fun you can have with it, and delay the intervals for needing to refill the bottles.

Any one of those ways; increasing the displacement to make more torque, or adding a supercharger or a shot of nitrous, are the best ways to really see a substantial increase in power for your vehicle. You “can” go out and buy all kinds of smog legal “performance” parts, but after spending big $ on approved heads, an approved cam profile, an approved intake manifold, a new exhaust system, etc., you won’t see THAT much of a power increase over what your engine makes in stock form. There are guys that’ll say to add Vortec heads (which you probably already have), and a “fast burn” cam, plus a few other little mods to make some more power, but that ain’t going to make THAT much of a difference in power, not for the amount of $ you’ll spend getting all of those parts and doing all of that labor. You might as well do it right, once… and be done with it so you can be out having fun with the REAL power you were looking for.