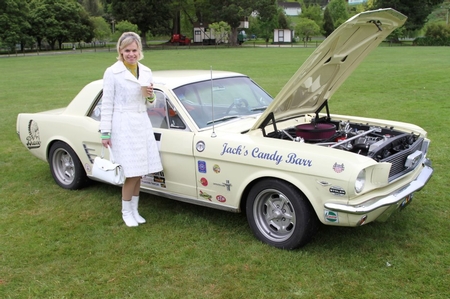 This innocent looking 66 Mustang belongs to Dennis Dowling from New Zealand. It might not look so "Bad Ass" to the naked eye, but trust us, once we were done with it, it's an absolutre BEAST underneath!

This car was bought new by Dennis' grandfather back in 1966. It was an original, no frills 289 with a 3 speed. It was the car Dennis rode to school in when he was a kid. When his grandfather passed away, he inherrited it and wanted to restore it and keep it looking like it did when he rode to school in it, BUT... he wanted it to have some serious GO and some good handling added to it. After a lot of planning, we decided on a nice, torquey full roller 408 stroker backed by a TKO-600 5 speed, a 9" rear-end, sub frame connectors, disc brakes, Total Control suspension components, and all kinds of other nice things... and that's just what it got!

Dennis shipped us the car as it sat for the past 30 years. It came from Florida so it was a bit rusty, everything was rotted and old. You'll see in the pictures below how bad it looked before we started, and what it looks like when we were done. Once the car was finished, we shipped it to where he currently lives in New Zealand. We have a LOT of customers out of the state and out of the country that we build cars and engines for. Actually we have customers in all 50 states and 14 countries. Dennis is just one of 3 customers we have in New Zealand.

This is what Dennis had to say; “Arron built an amazing 408 (I said I wanted something that would pull everywhere for the street), fitted everything from the radiator to the exhaust tips, including all suspension and drive train. He shipped the car to me in New Zealand, and the day it was ready to drive on the street (after painting, assembling and registration compliance), I took it the track to see what it was all about, and the n spent 5 days driving it over 2,500 miles on windy roads all over NZ in the Targa NZ Tour. Great job Arron – it brought a huge smile to my face and we dressed to match the year my grandfather bought the car new. And it’s just come off the dyno – 443 HP & 477 Ft/Lbs of torque – AT THE WHEELS! Awesome job man, Thanks!!”

To put that into perspective, the power at the flywheel comes out to about 525 HP and 565 ft. lbs of torque!! Not bad for a mild and tame 408 on pump gas. That little sleeper '66 really IS a little Bad Ass! 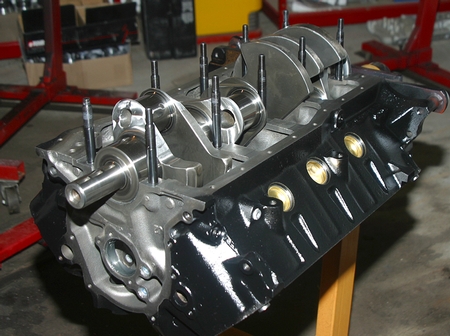 The new 408 stroker for this little sleeper started off with a fully prepped and machined 351W block. Here it has the beautiful lightweight 4340 forged crank sitting in it with the ARP main studs. 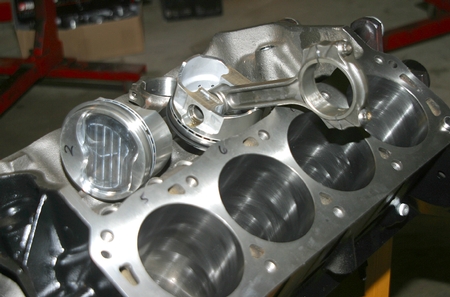 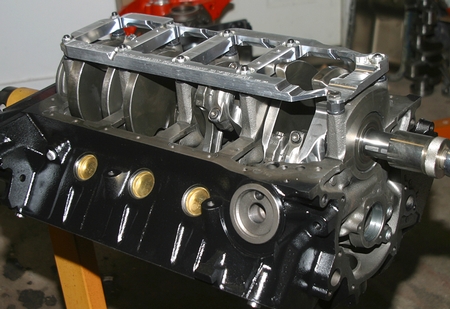 Here is the bottom-end of this beast almost all together now with the crank, rods, pistons and billet main support which add supwards of 300% more strength of this little beast compared to how it was in stock trim. 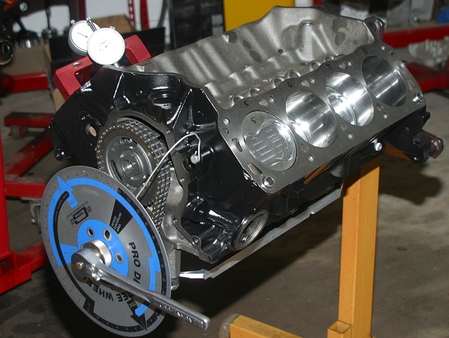 Getting the roller cam degreed-in. 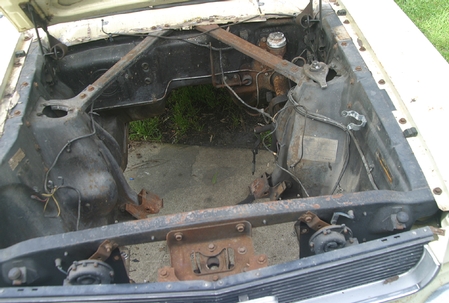 After we yanked the old engine and tranny out... it's pretty nasty in there and needs a lot of cleaning and rust removal. 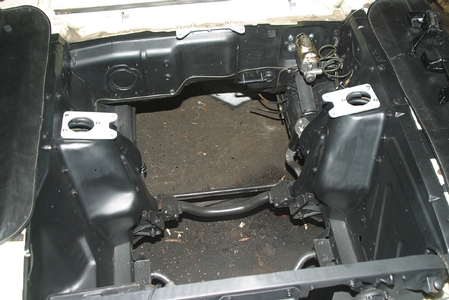 Here it is after we cleaned it all up and shot a little paint in there. What a difference! 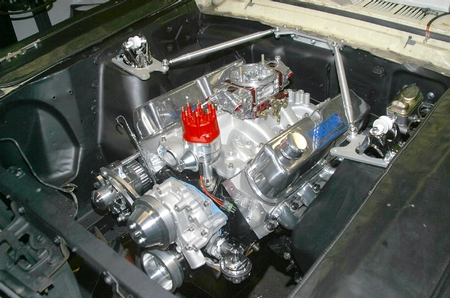 The new 408 power plant and TKO-600 tranny are in and looking great! 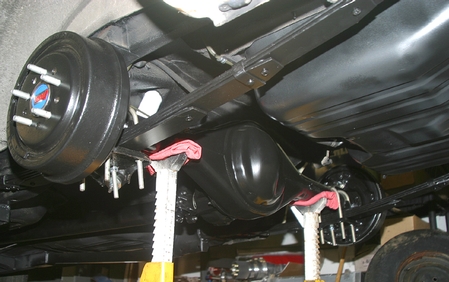 A shot if the under side after we did a lot of cleaning and rust removal. This is a view of the brand new 9" rear-end with 3.55 gears, a True-Trac limited slip, 31 spline axles and a massive drum brakes, plus the new 5 leaf springs, KYB shocks, and if you look close you can see the weld-in sub frame connectors we installed to help strengthen the chassis for all of the new power it is going to have. What you can't see in these photos (because I forgot to take a picture of it) are the nice SSBC power disc brakes up front and the Total Control front suspension, huge sway bars, etc. I think you get the idea in the pictures we do have of it though. 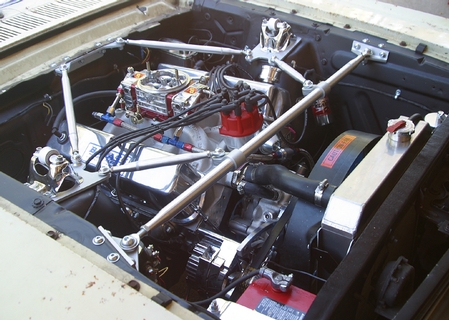 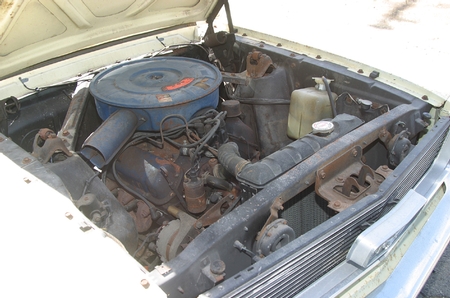 A Before and After slide show.

This is what else Dennis had to say: "Yeah, the DB9 tried to pull ahead at motorway speeds - forget about it! We were running with Ferrari, Porsche, Aston Martin, Jaguar and BMW and nothing could touch the old girl in a straight line or when it was flowing roads. Super tight stuff. After one stage the BMW pace car came over and just wanted to pass-on how impressed they were with the car. So I am way more than satisfied! The engine is a monster, and with original colour paint, pearl gold stripes and original trim and interior, it is the ultimate sleeper! I can start off in 4th gear, it starts in less than 2 revolutions, and idles like a sewing machine. Well done Arron!!"