How Much Power Can You Make On Pump Gas? 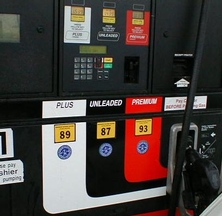 There is no concrete answer for this question because there are WAY too many factors & circumstances involved. Two identical engines, one with a set of cast iron heads and one with aluminum heads with everything else totally identical will make 2 different amounts of power because the aluminum throws heat MUCH faster than cast iron which means detonation doesn’t happen as fast, so you can run more timing and even more static compression which will net more power.

Obviously the engine displacement has a lot to do with it too. There's no replacement for displacement! There is stroke vs. bore ratios, etc. A larger stroke will make more torque (crankshaft leverage), while a larger bore and short stroke will usually make more horsepower. It all adds up one way or another depending on the variables. It just depends on how MUCH power you want vs. what is “reasonable” in cost & design.

No one can say X amount of power can be made on Y type of pump gas. I’ve built naturally aspirated big blocks that reliably make 600 - 700 HP on 91 octane, but those are fairly large displacement engines and are pretty radical. I’ve built single carbbed small block engines that dyno at upwards of 640 HP on 91 octane gas, but again… those are also very large cubic inch small blocks (460 cubic inches) and are quite radical. There is a "give" for every "take". In other words, just how far are YOU willing to go to GET that power? And how much "quirkiness" are you willing to deal with to get "the most power possible" on pump gas? Just know that in most cases, the more power you make, the quikier the engine and car gets. It ends-up driving you instead of you driving it, and they can become very temper mental. With EFI cars, this quirkiness and temper mentalness can be tuned out, but with carbureted engines, it can become a real handful.

There are plenty of 700 – 800 HP supercharged big blocks out there that run on 91 octane pump gas in pro street cars that are quite streetable. I’ve built quite a number of them over the years that make even more than that on the street and on pump gas, and on occasions over the years have had 2 or 3 of cars like that in my shop getting built. "Can" they make more? Sure, but at what cost in drivability, reliability and the potential danger of eating-up a head gasket or having bad detonation problems? Is that the kind of engine YOU want in your car? I doubt it.

The best of the best in all areas of making power in a standard sized engine (355 cubic inch) are NASCAR engines. You are talking about 800 HP at 9,200 RPM but they ONLY make that kind of power at extremely high RPM’s. They literally fall on their face off an idle to about 4,000 RPM. They REALLY need to be up at 8,000 - 9,000 RPM to make their power. Plus the fact that they run on race gas and have way too high of compression to run pump gas, so you have to take that and work BACK from there.

Take away that ridiculously high RPM range where they make their peak power and bring it down to a more reasonable peak power range, like 5,000 RPM, and that exact same engine just lost upwards of 150HP!! Now it isn’t 800HP anymore… it’s now 650!! Take away the insanely radical NASCAR cam profile and use something that is more reasonable for the street and you just lost another 80 or so HP. Now that engine is making in the 580 - 590 HP area. Take away the Sunoco race fuel and the 12:1 compression and replace them with 10:1 and 91 octane pump gas and that $45,000 800 HP NASCAR engine just lost another 60 or so HP. Take away the ridiculously large 235cc (or larger) intake runners on the 18 degree heads with the gigantic 2.220” CANTED valves and replace those with a more reasonable street size runner of 180 - 200 cc runner heads with typical 23 degree in-line valves that have typical 2.02” valves in them and you just lost another 50 HP or so, so now that once 800 HP engine is now making about 450 HP or so. Not impossible to make with a healthy 355 cubes on pump gas, but it certainly isn't any longer a NASCAR engine OR an engine that will make 800 HP again without a power adder or something.

Take a typical, well built 400 HP engine that is set-up for forced induction. With a supercharger or a turbo you can add an instant 150 or so HP and still run pump gas. Mercedes does it when RennTech takes their S600’s and pumps the turbos up more and installs a custom burned chip to get over 640HP and over 750 Ft Lbs of torque! It runs as quiet as a stock E300 Mercedes and is as smooth as glass. A friend of mine has a RennTech S600 that I drive sometimes. The new ZR-1 Vette isn’t any different with its supercharged 427 that makes 638HP and is as quiet as a Prius under normal driving conditions and as smooth as a baby's ass. Those run on pump gas too. These days, for about $50,000, I can go down and buy a Chrysler Hellcat with it's monster 707 HP and they run as smooth as glass, but those types of engines have power adders and all kinds of engineering to get that kind of power out of them, plus an EFI system that constantly adjusts the tune, the fuel delivery, the timing, etc, under various conditions. You can't (and won't) get that with a 50's designed engine and a carburetor.

So you can see there are WAY too many variables to give a “concrete” answer. One small thing like a poorly designed combustion chamber, or a piston top, or a bad quench area, piston side loading, etc can cause what SHOULD be a big time power maker to not make as much power as it should. There are just too many factors and physics that cause too many variables. I’ve seen 900 HP pump gas engines before that are naturally aspirated, BUT… they are big strokers that are sometimes in the 700 cubic inch area. That’s 1.27HP per cubic inch which is equivalent to a 350 Chevy making 445 HP. Hardly a number that is hard to achieve on pump gas with a well built 350, so it is all up to the variables and what you are willing to do, or put-up with to get the amount of power you want.