Do bigger engines always make more power, and what about gas mileage? 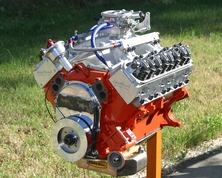 As the old saying goes: "There's no replacement for displacement!"

Internal combustion can ONLY take place within a VERY narrow air/fuel ratio, between about 8:1 and 16:1. 8:1 being barely able to run because it is way too rich, and 16:1 would causes misses (lean missing) because it is way too lean ([plus would be really hot temperature wise). Ideally some place between 12:1 and 14:1 are best for performance engines. They “say” 14.7:1 is “optimal”, but that does NOT ring true with performance engines because you need a richer mixture to keep the burn cooler.

Adding more wood to a fire cools it down, and can actually smother it out if you put way too much on it too soon, just the same as adding too much fuel can smother the combustion out. Of course once the wood has TIME to catch and burn it will increase the heat, but internal combustion happens in a nanosecond and doesn’t HAVE time to wait for more heat to burn more fuel, so what some would feel the obvious (putting more wood on a fire makes more heat) isn’t the same as internal combustion. When you are contained, such as internal combustion, and under pressure with events happening at supersonic speeds, things become a bit different than a wood fire that has time to catch and burn. On the flip side though, being ABLE to burn more fuel will most certainly make more heat & pressure, just like a firecracker makes a “bang” while an M-80 that has much more flash powder in it makes a big BOOM! Again, those are external combustion. Internal HAS to be within a given air/fuel ratio or it simply won’t light, such as when you flood your engine, you can’t start it. So by adding cubic inches you are naturally able to burn more fuel and make more power to the flywheel because the engine is drawing-in more air via raw displacement. Add the required amount of fuel and instead of a small engine being able to burn 3 drops of gas in each cylinder, a bigger engine might be able to burn 6 drops. That’s twice the pressure & BTU’s which push down on the piston and make “about” twice as much power. This is why a 454 big block makes so much more power than a 350 with the same sized carburetor.

Contrary to what a lot of people think, carbs do not “give” fuel. The engine TAKES the fuel via air speed & volume (velocity) as it passes past the boosters and draws through the main jets. More air “siphons” more fuel. This is why bigger carbs on small engines do NOT deliver too much fuel as most people think, and why they make the engine boggy and lazy at lower RPMs, because they actually run LEAN because the barrels and cfm are too large for the small displacement engine to pull enough air through to cause a good siphon effect through the boosters to deliver the fuel the engine needs to run.

It’s like sand blasting or painting with a spray gun. If you don’t have enough working pressure (air speed & volume), you can’t get the spray gun or sand blast gun to “pull” any paint or sand up the tube. To draw more sand or paint you need more air volume (cubic inches). If you have a small air hose (the cubic inches of the engine) you can’t siphon anything up and out the gun, especially if the sand or paint feed hose is large (like too big of a carb), so you need to put big hoses on large volume air compressors to get sand or paint to spray, just as you need to put big carbs on big engines to get them to deliver fuel and not be lazy.

More displacement means more air. Meet that air with the correct amount of fuel and you get a bigger bang (more power). This is why displacement makes more power and why dummies that put big carbs on their small engines have to “feather the throttle” to get off the line, or why they bog down at low RPMs and go much better at higher RPMs. RPM = more air volume & speed through the carburetor. That's why they can only start to accelerate once the RPms come up enough to make the carb work. It’s that simple.

So in a nutshell, it is obvious why more displacement makes more power and why when trying to MAKE power the old saying rings so true; “There’s no replacement for displacement!”. This is why guys that THINK smaller engines or high winding little engines make more power, when in fact, they don’t compared to a larger displacement engine, which is why we see so many strokers these days. They simply make much more power because they are capable of taking-in more air and burning more fuel.

Forced induction, (blowers, turbos, etc) and nitrous oxide all make power by simply cramming more air than the engine can take-in naturally, or by “chemically” adding more air (oxygen) with nitrous. Air doesn’t burn, fuel does… but again, with internal combustion you HAVE to be within that narrow air/fuel ratio or it won’t run. Force more air in via a turbo or a supercharger and you can burn more fuel. The ability to burn more fuel is what makes the power. Nitrous does it exactly the same by chemically adding oxygen into the engine which in turn allows you to burn more fuel. Contrary to what idiots think, nitrous doesn’t even burn. I can put a match out in it. It is simply an oxidizer. Just like an oxy/acetylene torch. Can you light the torch with just the oxygen on? No! You have to light the acetylene first (the fuel) and when you add oxygen the burn becomes better, hotter & more efficient. Displacement = more air which allows you to burn more fuel. It’s as simple as that.

As far as gas mileage goes, obviously when you have more displacement, you MUST burn more fuel to maintain that narrow air/fuel ratio for it to run, so yes, a larger cubic inch engine will get less mileage. This is why nitrous works so well, as do superchargers and especially turbos. On a small engine idling or just running down the road you are not under any boost so you are only burning enough fuel for the actual displacement of the engine to run. You get the power when you mash the gas because THEN the supercharger or turbo will force more air into the engine and allow you to burn more fuel (make more power). It is “on demand” power. Nitrous does the same thing except with a press of a button. When the nitrous is off, you are simply running around on the engine itself. When you arm the system and activate the nitrous, it introduces more oxygen inside the engine which allows you to burn more fuel to make more power “on demand”, so you'll get whatever mileage the small engine is going to get, yet have the ability to burn much more fuel and make much more power when you need it via the nitrous (or supercharger, turbo, etc.).

This is why you see SO many factory cars come with turbo’s or superchargers on smaller engines that get decent mileage (small displacement) yet make good power because of the on demand turbo that shoves more air into the engine when you are on the throttle hard. During normal driving conditions you are not under boost. You can’t make boost with the throttle plates closed or only partly open. It’s hard for a turbo or a supercharger to “grab” air when the air source (the throttle plates) are mostly closed off, so most of the time you are only able to burn what the small engine can take-in naturally.

An engine that is capable of making 800 HP naturally is for SURE going to burn more fuel than an engine that can make 800HP via a turbo or a supercharger (or with nitrous). Again… “displacement” HAS to be met with a given air fuel ratio or it simply won’t run. More displacement = more fuel needed to burn, which = less mileage. This is how Mercedes, Audi, Porsche and other car manufacturers can put-out cars that make 400 – 600 HP that still get decent mileage. It’s because of smaller displacement engines with turbos.

A Z-06 Vette makes 505HP because it is 427 cubic inches, (a large natural displacement), and why the same size engine in the ZR-1 Vette with a supercharger makes 638HP and gets about the same mileage. It’s also why the 5.4L Lincoln Navigator motor makes about 300 HP but that same engine in the Ford GT with the supercharger makes 550HP. Force more air-in on demand and you can burn more fuel on demand, which = MUCH more power out of the same engine with about the same overall (normal driving) mileage.

Making power isn’t brain surgery. It’s a simple matter of being able to burn more fuel to raise cylinder pressure. More cylinder pressure pushes down on the piston harder, which in turn rotates the crank faster and harder and = more power. It’s that simple.