Are ring gaps really THAT important? 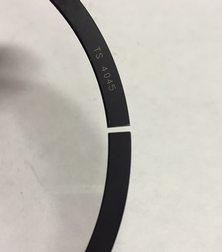 Here is a question I get from time to time so I thought I'd make a Tech Tip out of it.

Ring gaps are simple, they are a factor of A) the material of the ring, B) the type of coating the ring has, and C) how much that material expands under X heat conditions. X being; stock, performance, fuel type, race type (short burst or long hard hauls), and forced induction / nitrous use. Each one of those makes more heat than the previous. More heat = more expansion.

Rings expand under heat which closes the gaps up. You NEVER want the rings to expand too far and butt together or they will break, or possibly even break the top of the piston off! And in retrospect, you do not want to make the gaps too wide or they won't seal very well (make cylinder pressure) and it will use oil and smoke. So with that you FIRST have to determine HOW the engine is going to be used (stock, performance, race, supercharged or nitrous, long haul such as road race or short haul such as drag race), and of course fuel type because different fuels produce different BTU’s of heat & pressure. Once that is determined, THEN you can figure what gaps to run PER THE MANUFACTURER. They have already done the calculating of how much that particular ring will expand per usage for how much the ring size is, and the material type and coating type of the ring. This is why they give you choices, and why one ring size (or type) will be different than another ring type, size or brand.

Running balls to the wall "most of the time" would be more like endurance racing (road racing) and NOT like drag racing, so you would set the gaps by what they recommend for how you are going to be running that engine. Circle track & road racing is also more like what running balls to the wall “most of the time” would be like, so I would say to gap them at a ring factor of the recommended .0055” per inch of bore. A bore factor is simple. You simply times the bore size by the recommended ring gap factor. A 4.030" bore times .0055" = a ring gap of .022". Now obviously if you are street driving, you are NOT going to be driving balls to the wall "most of the time", and even when you do, it is for short bursts such as getting onto the freeway or passing someone, so the heat and pressures in the cylinder is short lived and won't require as wide of a gap as an engine that is running balls-out all of the time. 1/4 mile drag racing is similar in "most" cases in that it is only running hard for 8, 9, 10 or 11 seconds at a time. 1/8th mile drag racing is even shorter yet, so even though pressures and temperatures are extreme, it is only for a short period of time. Obviously power adders such as blowers or nitrous (or both) are going to add to the amount of fuel being burned which creates more heat, so this is yet another factor to take into consideration when looking at ring gaps. A blower or nitrous engine is going to need wider gaps because of all of the extra heat coming from burning that extra fuel. Ring gap factors of .0065 or .0075 in a mild blown or nitrous injected engine are very common, and on more serious engines can get as high as .0080 or more! Using the same math for the engine example I gave above, this would make a ring gap of .026" on the small side and as much as .035" on the more extreme side on a 4.030" bore. That's more than twice as much as a stock ring gap which is usually somewhere around .014" - .016". If you used out of the box rings that came with a stock gap of about .0015" on an engine that was blown or had a small shot of nitrous (100 - 150 HP), it would last about 5,4,3,2,1 kaboom before the gaps butted together and most likely brake the top of the piston off above the ring land.

As far as the 2nd ring goes, there are 2 schools of thought there. Most will say the 2nd ring needs to have a smaller gap because it doesn’t see the heat & pressure that the top ring sees so it won't expand as much. That seems to make sense and has been what 99.9% everyone has done for decades.

The other train of thought is to make the 2nd ring gap wider than the top ring because it lets trapped gasses & pressure “out” and helps to prevent “ring flutter”. When ring flutter happens it causes the ring sealing surface to skip across the cylinder wall, much like your windshield wipers skip across the windshield making that annoying noise when there isn’t enough rain on it. The wiper leaves skippy marks where it lost contact with the windshield. Well, imagine a ring doing the same thing. If it loses its seal for even a nanosecond, then it means it lost pressure too. Cylinder pressure = horsepower, so if you lose ring seal via ring flutter, you are losing power. Now, I am not sure just how true the ring flutter theory is, but VERY reputable & respectable places that do a LOT of dyno testing, such as Reher-Morrison, have found that widening the 2nd ring gap prevents ring flutter and thus makes more power, or rather… PREVENTS the LOSS of power. Those guys are NOT dummies, so if I was going to believe anyone on a subject like this, unless I personally did a BUNCH of dyno testing myself, (which I'm not willing to do at this point just to find that out), they would be the one’s I'd trust.