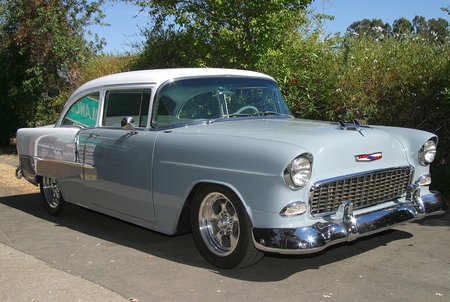 This nice looking 55 Chevy belongs to Larry Ryan from Sonoma. It's nice looking and runs great now, but it sure didn't come-in that way! The "shop" that built it and sold it to Larry litereally slapped it together to make a quick sale. Things like the wiring were only halfway hooked-up. Some of it didn't work because whoever "tried" to do the wiring had grounds going to thick painted surfaces that didn't conduct. The air conditioning system was just sitting under the dash with all of the wires & ducting tucked-up out of the way (but not hooked-up), the fittings were finger tight so the heater, nor the A/C worked. It had no windshield wipers, which sit behind the A/C system, but luckily because it needed the A/C system removed and actually "installed" so it can work, it wasn't a complete loss of time installing them.

It also had bad valve noise and was in dire need of a good tune - even though the engine was brand new. Whoever installed the disc brakes had them as hokey-rigged as you can get. We had to completely replace the rear disc brakes because they were some cheap / crappy bastardized ones off of some old crappy 80's Cadillac. The E-brake didn't work because the cables were cut too short and were crushed between the body and frame. 95% of the suspension and steering was slapped together. Many of the nuts were not even tright and were missing the cotter pins. The A-arm bolts werer literally falling out. Actuallay one DID fall out on Larry and left him stranded on the side of the road! The headers were literally falling off and were leaking so loud, it sounded like it was uncapped, not to mention the headers aren't desdigned for angle plug heads so several of the plug wire boots were sitting right ON the header tubes. I mean, this thing was a complete and utter MESS... like a couple of rookies did it, but we jumped-in and addressed everything. Now it runs like a top and everything is wired-in and works. 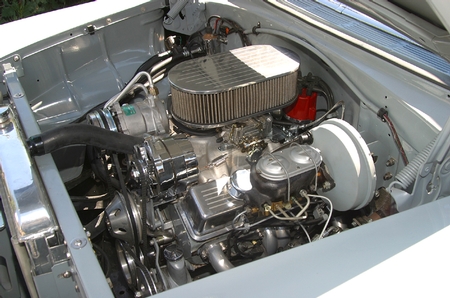 Nice and clean under the hood with a nice running 350. Now that we've gone through it and fixed the valve train and all kinds of other issues, it runs pretty nice. Of course it isn't a rocket like it would be if it were a true "Bad Ass" built engine, but all in all, it's a nice little runner now. 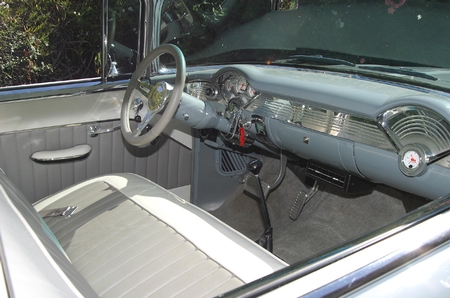 The interior is nice and clean and not over done. The custom interior matches the paint. 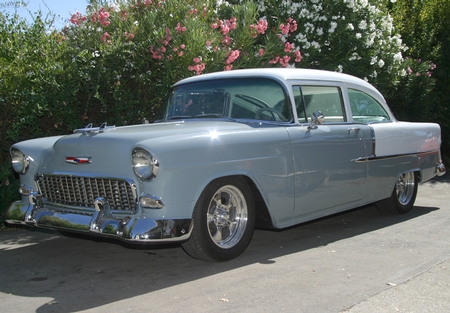 It has a nice stance now. We raised the front-end a bit because it had too much of a rake to it and was scraping every little bump in the road. This little 350 / 700R4 tranny combo might not be a race car but it is a GREAT little cruiser and is lots of fun to drive (now).