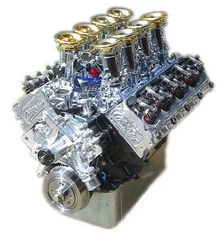 We get a lot of requests from people asking what the differences are between the types of common Ford Engines. We especially get these requests from guys that have cars equipped with Cleveland's after we've suggested switching over to a Windsor platform, so below are "basic" differences between them.

There are basically 4 sizes of Ford engines. Although most just say there are big blocks and small blocks, there are also variations in between, as well as design differences. From biggest to smallest, the common V-8’s are;

429, 460 – classified as a “385 series” big block. Basically a giant Windsor design with in-line valves. These are the big boy engines. They also had 429 “Cobra Jet” versions, and also an even rarer 429 “Super Cobra Jet” version with massively large runner heads and valves. We build a lot of variations of these in 521 and 545 cubic inches that make MONSTER torque! The best common years for using stock components to make good power were the D0VE and D1VE (1970 and 1971) heads, but those were NOT the Cobra Jet or SCJ heads, and compared to something like the aluminum Edelbrock Cobra Jet 460 heads, there is no comparison between the best of the best D0VE or D1VE heads and those Edelbrock heads for making big balls power. Kaase Racing also has some nice heads called "P-51" heads that make big power numbers. We’ve built many stroker versions that dyno’d at upwards of 650 – 700 Ft Lbs of torque! That’s as much as a Dodge Diesel truck! If you have a heavy vehicle and need some serious raw power to get it moving, then one of these series of engines is a good choice. 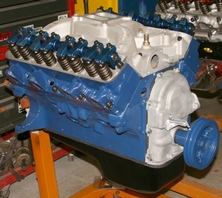 352, 360, 390, 427, 428 – Classified as “FE” series big blocks, FE stands for Ford Edsel. The FE series engines were an earlier design that came in Mustangs, Shelby’s, T-Birds, trucks, and even Cobra’s. Common sizes were the 360 for trucks. 390 for cars like Mustangs, T birds, Cougars, etc. 427 for rare cars like Shelby’s, Thunderbolts, Galaxies, etc. They had 2 versions of the 427 as far as the blocks go. The center oiler and the side oiler. For some reason Ford anticipated an oiling issue with the center oiler type blocks for race use so they designed the side oiler, even though there was never an oiling issue or a pattern of failures with center oilers. You found the side oilers in rare cars and production race cars for the most part. The blocks had “cross bolted” main caps to increase strength. Center oilers were much more common though with no cross bolted mains. 427’s also had different versions of heads, such as “low riser”, “medium riser”, and “high riser”. They also had “tunnel port” versions which were extremely rare and had runners so big, the push rods had to go right through the intake port. The 428 looked similar but has a smaller bore and longer stroke than the 427. They also had “Cobra Jet” versions of the 428 which came in high performance cars such as Shelby’s, Cobra’s, rare Mustangs, etc. Most of the so called “427 Cobra’s” actually had 428 Cobra Jets in them because the 427 side oilers weren’t plentiful enough. This was also true for the Shelby GT-500KR cars. Many of them had 428 Cobra Jets in them too rather than 427 side oilers. The problem with the FE engines is they are expensive to build and not the greatest design in the world with shaft type rockers and push rods that go right through the intake manifold. Also, the block castings were VERY "iffy" as far as thickness inside the water jacket areas and need to be sonic checked to be sure there is enough material to be bored or to be stable enough for performance use. 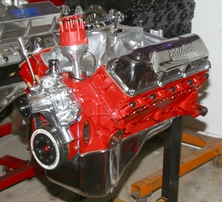 351C – Basically all Cleveland type engines (canted valves), classified as mid sized blocks. Not really a big block, but not a “small” block either. Cleveland’s are based off the famous BOSS 302 from 1969 and 1970. The BOSS 302 was short lived because Ford figured out that the massive valve and head runner sizes worked pretty well in Trans Am racing, but not very well on the street unless you were at 6,000 – 8,000 RPM and had really short rear-end gears. 302 cubic inches simply wasn’t enough cubic inches to achieve any velocity through the heads to make any torque or low to mid range power on the street, which is why it only lived 2 years in production. In fact, Ford made the valves smaller in '70 BOSS 302 heads than they were in the 69 BOSS heads to help remedy the sluggish, low velocity issue, but it still didn't help much. Ford decided to make the 351C-4V which is very similar to a BOSS 302 except with 351 cubes to make those heads work a bit better. They even had a BOSS version with 4 bolt mains. You usually saw those in Panteras and rare Mustangs like the Ram Air Mach 1's, etc. Ford also modified the combustion chambers with a dual quench design to help get a better burn in the cylinder and made the valve sizes a smidge smaller than what the 69 BOSS 302 came with to help with lower to mid range RPM flow and torque. Ford also got wise and made a 2V version with MUCH smaller runners in the heads, much smaller valves, etc which ran fairly decently on the street and made much more low-end torque and response than the 4V version. It was a better suited engine for larger / heavier cars and for "normal" driving. The problem with Cleveland’s though is that compared to a Windsor, they are heavier, much bulkier and make for exhaust header issues when swapping them into cars like Mustangs, etc. Not to mention the head runners are just too large for most guys on the street unless you have short rear-end gears and high stall converters. A great variation to remedy a lot of the issues is to turn one into a 393 stroker, The added cubic inches makes the heads work better and adds to making more low-end torque. It’s quite easy to get 500 HP and around that in torque with a well built 393 stroker.

The problem with Cleveland engines, other than what I just listed above, is that they are more expensive to build than a typical Windsor engine, not to mention they are heavier and are much bulkier in an engine bay than a Windsor, so in a lot of cases, guys with cars they are modifying for performance use tend to set their Cleveland's aside and swap over to a Windsor engine. Headers fit better, they're lighter, less expensive to build, they have better designed heads, etc, etc. In fact, even guys with Panteras do this Windsor swap to lighten-up the car and make it more responsive at lower RPMs. Ford dumped the Cleveland engines for a reason... and they stayed with the Windsor platform for almost 4 decades for good reason. If you have an original Cleveland car that you want to keep stock, like an original 351C-4V Ram Air Mach 1, etc, then by all means, it DOES make sense to stay with the original Cleveland, but if you want to build something for performance use that has more options and less costly components, then I'd suggest going with a Windsor. 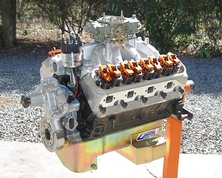 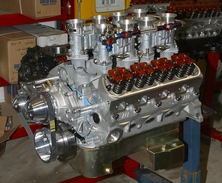 Windsor’s are the smallest of the V-8 engines, with the 289 and 302 being the most common. The problem with those is that it is hard to get any “real” power out of them (torque) because there simply isn't enough stroke, and the stock heads have tiny little runners and valves. You could cover the entire exhaust port between the tip and first knuckle of your thumb! When you do build them to make serious power, (aftermarket heads, blown, nitrous, etc.) the blocks just don’t take it very well because they just aren't beefy enough.

In 1969 Ford came-out with the 351 Windsor which was basically a beefier version of the 289 / 302, which are about an inch taller and wider than a 289 / 302. Side by side (a 289/302 next to a 351W), it is hard to see the difference in size, but the Windsor has larger head bolts, larger – thicker main caps, larger & stronger main bolts, thicker main webs, a taller deck height for much better rod angles and internal geometry, etc, but sitting side by side to a 302 it looks almost identical. They pretty much all use the same timing covers, water pumps, valve covers, exhaust manifolds, etc. between the 289, 302 and 351W. It is more “internal” differences than external, but the power making capabilities and power HANDLING is MUCH better. The only "bad" 351W's to use are the 69 and 70 blocks because they had a shorter deck height of 9.480". In 71 Ford decided to raise the deck to 9.503". It's only a .023" difference. It doesn't sound like much until you go to find pistons that don't stick up above the deck surface, so we prefer to stay away from 69 and 70 blocks and just go with the 71 and up blocks.

In the 80’s when the 5.0 Mustangs were getting more and more popular, companies like Edelbrock, Trick Flow, and other’s began making much better designed heads with larger valves, larger runners, better designed combustion chambers, etc that could support making MUCH more power than any factory 289 / 302 ever could. Once companies like Air Flow Research came into play with CNC’d heads that make amazing power numbers, and companies like Paxton, Vortech, etc stared the centrifugal supercharger craze, the game was on, but the problem was, the 289/302’s just didn’t have the cubic inches to make any "real" low-end torque, which is much more important than “horsepower” for moving and accelerating a vehicle, nor the strength to contain and handle all of that added power, so the 351 Windsor’s began coming into play. With a 351W you could have a MUCH stronger engine and make MUCH more power (and torque) than ANY 289/302 based engine. Once this took hold, companies like Scat and Eagle began making better & stronger cranks, rods, etc and began making stroker kits to turn little 289’s & 302’s into 331’s and 347’s! They also began making stroker kits for 351W’s to make 393’s, 408’s and 427’s out of them! Now you could build a fairly tame small block that can easily make 450 HP and 500 Ft. Lbs of torque on plain old pump gas in a package that can easily fit under the hood of a 65 Mustang! We commonly build 408’s that make upwards of 530 HP and 575 Ft Lbs of torque (on standard pump gas) that with good traction and a decent stall converter commonly propel 65 / 66 Mustang’s into the low 11 second, and even the mid 10 second quarter miles times in basically full street trim! Not even new Shelby GT500’s with their supercharged 5.4L / 540 HP engines cut those kinds of quarter mile times.

Of course there’s a LOT more to it all than what I just listed, but for the “basics” of what the differences of these Ford engines are, this gives you a pretty good overall idea. Now, if you want to know even more about Windsor engines and why you might want to choose one over the other, then check out our Tech Tip titled “Small Block Ford Reality”.