What heat range sparkplugs should I use? 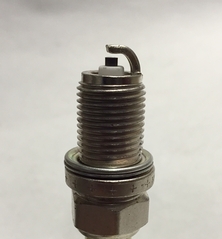 This seems to be a mystery to a lot of people, and funny enough, a lot of people cause their own spark plug fouling issues because they choose way too cold of a plug because they believe their "performance" engine needs a colder spark plug. Unless you're running a seriously powerful engine with extreme cylinder temperatures, such as a blown engine with a hefty amount of boost or a nitrous engine with a fairly healthy shot of juice, then you really don't need a colder plug.

On most engines making between 300 and up to the 500 HP or more area on small blocks and 600 HP or so area on big blocks, the heat range on the plugs should most likely be a stock heat range. The idea of running colder plugs on performance engines is “mostly” a bunch of BS unless you’re running a blown, alcohol, nitro engine, or unless you have 13:1 compression or higher. The idea is to run a plug as warm as you can that doesn’t burn-off either of the electrodes. Carbon, oil, etc stick to cold plugs, just like you can’t clean-off greasy dishes with cold water. You need hot water to melt-off the grease. Plugs are no different. If they are too cold, crud sticks to them and fouls them out. If they are too hot, the electrodes will melt and/or round-off. 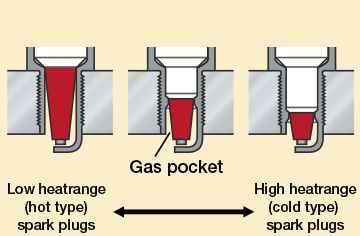 Some people think that running hotter plugs will cause the engine to run hotter. That's an absolute absurd thought being that the combustion temperature heats the plug... not the other way around. In other words; the plugs don't heat the engine... the engine heats the plugs. Plugs are inert and don't make heat. Hold one in your hand... is it hot? No. So how can an inert item heat-up your engine? It can’t. All a hotter plug means is how hot the core temperature of the spark plug itself will be to help it to “self clean”. What do you do to a modern oven to clean it? You turn it to the “clean mode” which super heats the inside and melts-off any grease & incinerates any crumbs, etc into a lightweight black carbon ash that can easily be wiped off. It’s the heat that causes it, just like the core heat of a spark plug dictates how well it self cleans itself. Obviously if the oven got too hot it would melt the metal inside, so it too needs to be within it's safe range to prevent this from happening.

If you are unsure of what heat range to run, start with a typical stock heat range. If you are choosing between two heat ranges, start with the hotter plug first and go from there. The worst that can happen with too hot of a plug is it will melt the ground strap electrode back a bit and cause the plug to fire oddly because that screws-up the gap. In 99.9% o the cases it will not cause any engine damage. The worst thing that happens when you use too cold of a plug is; it fouls out and gets all cruddy and clogged-up with oil, fuel and carbon deposits and won't spark anymore. It's no fun having to buy and change plugs all of the time when you don't need to, not to mention... a cylinder that isn't firing is getting flooded with raw, unburned fuel which WILL cause cylinder wash down and skirt scuffing! 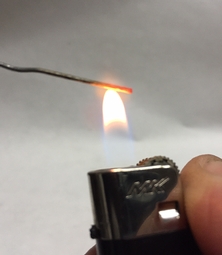 Most aluminum cylinder heads use a standard long reach plug. For example, the Autolite 3924 is a VERY commonly used plug in engines making up to about 600 HP or so, and it's a heat range that most stock engines use.

Now, on engines that really are making some serious power and that have some serious combustion temperatures, such as nitrous or forced induction engines, they'll go down a few heat ranges to a colder plug, BUT they also use plugs that have thicker center electrodes AND thicker and shorter ground straps so they don't end-up being "glow plugs" under those extreme heat conditions when they are on the juice or under high boost levels at WOT.

Take a thin piece of wire, such as a paper clip and hold a Bic lighter to it. In a matter of seconds it will begin to glow cherry red just like a glow plug does. Now take a thicker piece of wire, such as a coat hanger, and hold that same Bic lighter to it. Sure it'll get hot, but it won't glow cherry red because the mass is too much for that amount of heat to get it to a cherry red state. This is exactly why thicker & shorter ground strap plugs are used and thicker center electrodes in engines making more extreme combustion temperatures.

Now look at that Bic lighter and thin, glowing paper clip and imagine if the heat got turned-up just a little bit more. It would literally melt the wire right off because the heat source is too much for that wire to handle. Spark plugs, heat ranges, and electrode thickness are no different.

Sometimes using a heat range that is a bit too much on the hot side can be to your advantage when using serious amounts of nitrous or when running high blower boost levels. A trick with very experienced guys is to run a plug that is on the hot side, so you can literally use the plug as a "safety fuse". In other words; if your plugs run just under the melting point, then when you have the misfortune of leaning the engine out too much, (which is THE worst thing you can do to a nitrous or supercharged engine), it will instantly increase the cylinder heat which in turn instantly increases the plug's heat and will actually melt off the electrode causing that cylinder to not fire anymore. No more fire = no more heat. No more heat means no lean-out melt down. You'll notice the sudden loss of power and misfiring and you'll quickly get out of the throttle. Obviously it takes time and testing to figure out exactly what heat range and type of plug to run for any given application, but these tips give you some good ideas and starting points. 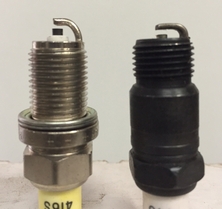 So you might be asking yourself; "Why are there extended tip and non-extended tip plugs in the first place?" Well, an extended tip plug tends to light the cylinder a little better because the spark is a little more centered into the burn area. Another factor is that extended tip plugs tend to self clean a little better and vary their electrode temperatures to your advantage because the incoming / wet air/fuel charge cools the electrode under normal driving, and heats up to self clean under higher heat, hard acceleration conditions. Or at least that's the theory anyway. How much it is actually affected will vary because every engine is different, such as stock engines vs. performance engines, combustion chamber sizes & shapes, etc. A disadvantage (other than what I already said about the tip becoming a glow plug in extreme conditions), is that the extended tip can often smack domed pistons when small chambers are used. This is especially true with small block Chevy's and is one of the reasons GM made angle plug heads. It is thought by many that angle plug heads were designed to increase power because they angled the plug towards the intake valve, which I'm sure does help the burn and increase power a bit, just as indexing a spark plug will increase power too, but the main reason GM did this on their 70's and later performance heads was to move the electrode away from the piston in case domed pistons were used, such as what the early Z/28's and LT-1's had. In these situations, we use non-extended tip electrodes which allows more clearance between the spark plug and the piston when needed.