How to determine the right gear ratio for your car 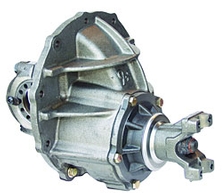 How to determine the right gear ratio or your car is easy once you take a few things into consideration. Rear end gears are EXTREMELY important for how a car performs. In fact, they are every bit as important as the engine itself! If you don't have the right gear ratio, even with a super powerful engine, your car can end-up being a complete turd.

Let me give you some examples: Firstly, always remember this, rear end gears are no different than the 5 sprockets you have on any given 10 speed bicycle. To do wheelies and be able to climb steep hills, you need low gears. You certainly can't do a wheelie in anything higher than 4th gear on a typical 10 speed bike because the gear ratio is just too tall, no matter how string your legs are. In retrospect though, you can't go fast down the road if you are in 1st, 2nd or 3rd gear. Put the bike in 5th gear and try to do a wheelie. You won't be able to because the gear ratio is too tall. On the flip side, put the bike in 1st or 2nd gear and try to ride 30 MPH down the road. You won't be able to because your legs can't spin the pedals fast enough. You'll run out of RPM and will need to shift to a higher gear. Rear end gears on cars are no different, and having the wrong gear ratio is exactly like trying to do a wheelie in 5th gear, or trying to go down the road at 30 MPH in 1st. Neither one is going to happen because the gear ratios are completely wrong for what you are trying to do

Drag cars need low gearing so they can launch hard and get to the finish line as "quickly" as possible, where something like a Bonneville car needs tall gears to be able to reach the high top speeds that they go. When guys want to make their cars "perform" better, (and don't know any better), the only thing they look at and consider is the engine. The engine is literally only HALF of the battle. The gearing is the other half.

A car at the drag strip with 4.11 gears and a 300 HP engine will launch harder and will be quicker than a car that has 500 HP and gears that are way too tall. 80% of the race is the first 80 feet! If you can't launch and GET to your speed quickly, you won't run a good elapse time. It also means you'll get your doors blown off in a street race from stop light to stop light. You can brag all you want that your engine has 500 HP when your buddy only has 300, but if he has the right gearing, his little 300 HP car is going to send you home crying to mommy when you lose a race from a dead stop to 75 MPH or so, which is where 99% of street races happen.

The best way to determine what gear ratio you need is to determine how you'll be driving the car. If you are only wanting to drive around town and do effortless burnouts, be "quick", and look great at the Wednesday night drags, then you'll want a set of gears that best suits that style of driving, which will be low gears. The thing you need to do is determine what MPH you think your car is capable of going, or what your max RPM is based on your cam profile, valve springs and where your engine "noses-over' on the power curve. 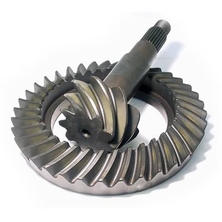 If your engine peaks-out or "noses-over" at say, 6,400 RPM, then there's no reason to make it rev beyond that point or you're just going to go slower. Too many guys like to brag about how high their engine can rev, which just shows how much they DON'T know about cars, engines, and performance. Sure, LOTS of engines can rev way past where they nose-over, but it's completely counter productive to run it past that point. You always go by where it peaks out on power... nothing higher in RPM than that!

So using the 6,400 RPM example I gave in the past paragraph, you won't want to go through the finish line higher than that or the car is "nosing-over" and isn't pulling as hard as it was when it was under that peak RPM.

Keep in mind, and this is VERY important, torque converter slip! Even though 6,400 RPM is much higher than what hot street cars run for stall converters, (which are usually around 3,000 RPM or so), they still have slippage of 200 or 300 RPM or so up at high RPM, so you need to be aware of this when calculating any of these equations. This is especially true when trying to determine what RPM you'll be at when traveling down the freeway at 60 MPH because at that low of an RPM, your 3,000 RPM stall converter is slipping several hundred RPM which will throw you a curve ball when trying to calculate these numbers. In other words, the math might say you'll be at say, 2,700 RPM at 60 MPH, but if you have a slippy converter, such as a 3,000 - 3,500 stall, you can easily have 500 or more RPM of slippage which will add to that cruise RPM you calculated. So the reality is, you might THINK you'll be at 2,700 RPM but with the converter slippage you could really be at something more like 3,200 RPM or more!

So looking at that 129.79 (130) MPH number we calculated, that's within the quarter mile time of a typical low to mid 10 second car. If you think your car can't run 10's then you can adjust the gear ratio up or down to suit what speed or RPM you want to go through the finish line at. Let me give you an example; swapping those 4.11 gears out for a set of 4.56's and using the same numbers, you'll be going through the finish line at 116.96 (117) MPH at 6,400 RPM. Not as "fast" mile per hour wise, but you'll launch harder and will get there quicker. 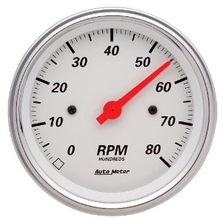 So let's take a look at running down the freeway using this same car set-up and numbers. If you aren't into drag or street racing and you live in an area where you mostly do freeway driving for extended periods of time, you won't want (or even care about) a low gear ratio for jack rabbit starts. You'll instead want something that'll get you better gas mileage and cruise down the highway at a decent RPM. So let's look at a couple of equations for determining what speed and RPM you'll be at for a given gear ratio and tire diameter. I'm going to use 70 MPH as our cruise speed with the same 28" tire diameter we used before. This is a slightly different equation so pay attention to the numbers. 70 MPH x the axle ratio you want to see about x 336. So 70 x let's try a gear set of 3.50's, x 336 = 82320. Now divide that number into the tire diameter which will give us the RPM at 70 MPH.  82320 28" = 2,940 so at 70 MPH with 3.50 gears and 28" tall tires you'll be at 2,940 RPM.

Again, you MUST take into consideration torque converter slip! If you have a slippy converter of say, 3,000 RPM, then you are definitely going to see 300 or so more RPM than what the math just gave you unless you have a lock-up converter OR you are running a manual transmission. ANOTHER very important thing to consider is what type of tranny you are running. In other words; does it have an overdrive? All of this math is for a 1:1 high gear ratio which is what all TH-350, TH-400, C-4, C-6, FMX automatics have for high gear, as well as pretty much all 3 and 4 speed manual transmissions. If you have an overdrive tranny then you can calculate the number by dividing the overdrive percentage into the final number. If you have a .80 overdrive (20% overdrive), then remove 20% from that RPM number and you'll be in the ball park for what your 70 MPH cruise RPM will be.

Just for giggles, if you chose to run the 4.10 gears, at 110 MPH you'd be spinning 6,061 RPM. Now add the torque converter slippage of a couple of hundred RPM and you're up into the 6,300 RPM area which is just too high for an engine that noses-over in power at 5,700 RPM. In almost all cases it's better to go less in RPM than too much. It's also easier on the engine and components.

So here's the math equations again all by themselves.

To determine what RPM you'll be at for any given gear ratio and tire diameter:

To determine what speed you'll be going with a given tire diameter and gear ratio:

To determine what axle ratio you'll need for a given speed and tire diameter: