How high will my engine rev? 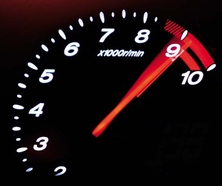 The question should NEVER be "how high will it rev?" but rather, "At what RPM does it make it's peak horsepower at, and is the engine built strong enough to run at it's peak power making RPM?".

A bone stock Chevy 350 out of say, a 69 Caprice can rev to over 7,000 RPM without coming apart. Oh, it quit making power way back at around 4,500 RPM due to the restricted heads, the anemic cam, the small carb and so on, but if you keep it floored long enough and the valve float isn't too bad, it'll go right-on up to about 7,000 RPM.

How high an engine can rev is one thing, where it makes its power at is an entirely different thing. If you build an engine with top of the line components, (like one of ours), it can safely rev to 8,000 RPM, but it may peak it's power curve at only 6,000 RPM. That's all dependent on the heads, the cam profile, teh valve springs, the stroke, the exhaust system, the intake system, etc. So what happens if you take it past its peak power curve? It'll lose power dramatically! You can lose 50 or even 100 HP by revving an engine over it's power making limit, so why would you want to do that? Just to say your engine revs high? To people that are in the know, you'll sound like an idiot.

A high revving engine is completely worthless in a car that doesn't have a high stall converter, super low rear-end gears, or one that is driven on the street. Race cars with hig revving engines launch on the rev limiter and they HOLD that RPM all the way down the track. In road race cars, they run around the track at between about 4,000 and 9,000 RPM because that's where those types of engines make their power. If they didn't do that, the car would fall on its face and be a complete turd. They don't rev them that high because it is cool or because it sounds good. They rev them that high because that's the ONLY place those engines make their power! Not very good for a street car.

Scenario: You're racing a guy, and while you're busy trying to impress everyone around by showing them how high your engine can rev by taking it past it's peak power making point, the guy along side of you that shifts to the next gear within his power range is pulling away from you. In other words, you're losing the race because you're trying to look cool. That ain't very impressive and all it does is put un-do strain and wear on your engine for nothing.

So, never ask "How high will it rev?"... because it will definitely rev beyond it's power making capabilities. Always ask, "What RPM does it make its peak HP and torque at?" so you'll know how high to take it to. 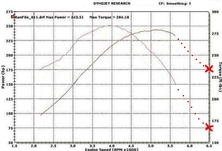 Let's look at a couple of dyno sheets to prove my point. Click on the image to the left and it'll enlarge. This dyno sheet was from a run done at Edelbrock's facility on a fairly stock 302 Ford engine. Look at where it makes its peak torque and horsepower at. Peak torque is at 3,900 RPM, and peak HP is at 5,200 RPM. Take a close look at what happens as the RPM keeps going up and what a dramatic loss of power there is. I plotted-out the path of loss to 6,500 RPM with red dots to show just how much power that engine is losing as the RPM increases past its peak RPM. Torque went from it's peak of 254 Ft Lbs at 3,900 to about 160 Ft Lbs at 6,500 RPM!!! Horsepower peaked at 243 at 5,200 and dropped all the way down to 175 at 6,500 RPM. That's a loss of 68 HP in only 1,300 RPM!! Imagine if this was your 66 Mustang with a 302 in it with maybe an Edelbrock RPM intake and 600 carb, a set of headers and maybe a couple of more minor additions like most guys have, and you brag that you shift your car at 6,500 RPM because it sounds awesome up there and you like to impress people with how high your engine revs. All you are doing is looking like a dork to anyone that knows anything about engines because you are LOSING a almost 70 HP by doing that. You might as well be applying the brakes from 5,200 RPM to 6,500 RPM because that's about what a 70 HP loss will feel like, and that's not going to win any races!

So let's say you have en engine that is a LOT more built than a mild 302 and makes a LOT more power, does this peak RPM thing still apply? Sure it does! Look at the dyno sheet to the right. Click on it to make it bigger. This is from a seriously bad to the bone turbocharged small block Ford. Look at how much power it makes. It's making a whopping 1,177 HP and 1,097 Ft Lbs of torque! Now look at where it makes all of that power at. Peak torque is at 5,200 RPM and peak HP is at 5,800 RPM. Again, I plotted out with red dots the loss over just a 1,000 RPM increase in RPM and look at what a dramatic loss of power there is. 377 HP and 472 Ft Lbs of torque is LOST by shifting just 1,000 RPM higher than where it's peak was at. Imagine if the guy that owned the car this monster is in bragging that he shifts HIS engine at 7,500 RPM! He would probably be losing double of what the numbers were at just 1,000 RPM over his peak points, and what a dork he would be for doing that! That's not how you win races! This is why you NEED to know WHERE your engine makes its peak power at and then make that RPM where you shift at. There is a HUGE difference between how high an engine CAN rev and how high it SHOULD rev, and it's all based on what RPM it makes its peak power at. 95% of the time it is much lower of an RPM than people think. Just because your engine CAN rev higher doesn't mean it's making more power up there. They all "nose over" at some point!

And remember this; it's better to set your shift points about 300 - 400 RPM UNDER your peak power RPM because when your eyes see the tach and your body reacts to shift, and the shift linkage moves, there is a time delay for hydraulics and clutch packs in the tranny to hook-up and lock into the next gear, all while your foot is still to the floor, so you'll be increasing in RPM AS you are shifting, so you want to shift slightly early. Besides, look at the dyno sheet again... there is a plateau of power just below the peak RPM, so you are really AT your peak power longer before the highest RPM than if you rev it more and are on the downward curve of losing power. 95% of the time it's better to slightly short shift than it is to over rev. Now you have proof for why.