How can I make more power and still pass smog?

I get this question a lot and you only have a couple of options. Whenever you increase horsepower, you are automatically going to increase the amount of hydrocarbons coming out the tail pipe and that is what the smog station is looking for. Increasing horsepower means burning higher volumes of fuel. Burning more fuel = more hydrocarbons.

You can opt for a whole bunch of expensive add-on's such as a computer chip, a larger Mass Air flow, a "Cat back" exhaust system, a K&N air filter and so on, but what you get for your dollar, as far as really being able to "feel" the so called added horsepower, isn't much at all. You might spend $350 on a chip, $60 on a K&N air filter, $175 on a larger Mass Air Flow and $400 - $800 on a "Cat Back" exhaust system and maybe feel a slight difference, so that's about a thousand or so bucks for maybe 25 or 30 extra horsepower if you're lucky.

Headers are always a good choice if there is a set available for your vehicle that carries a CARB (California Air Recourses Board) exempt number, but don't expect to feel like you now have a race car with merely a set of headers bolted on, 'cause you probably won't feel much difference at all with those either, but still, I think they're a good choice.

There are basically two options you have that will make a substantial difference in power AND still be smog legal.

1: Bolt-on a small nitrous oxide system and go. That one's pretty simple, and contrary to what you might have heard from "experts" who have probably never even owned a nitrous system, it doesn't wipe out engines if it is used in moderation and set-up correctly. This is probably the easiest, cheapest and fastest bang for the buck you can do and still be able to pass smog, and if you keep the power level down to about a 75 - 125 HP shot, you should be fine, but if you go trying to add a 450 HP fogger system to your stock engine... kiss it good by the first time the button is pushed. You just can't do that to a stock engine. So, would you rather spend about a grand or more on all of those little bolt-on goodies and gain maybe 30 horsepower (if you're lucky) or bolt-on a small nitrous system and have enough power to blow the doors off of just about everyone in your neighborhood? 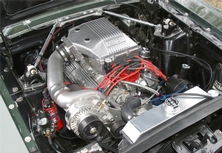 2: The next best thing as far as adding instant horsepower and still being "smog legal" is bolting-on a small supercharger. I'm not talking about a roots type blower like a 6-71 or 8-71 you see sticking out of the hood of a hot rod... I'm talking about a centrifugal supercharger such as a Vortech, Paxton, ATI ProCharger, Powerdyne, etc. Most of them offer bolt-on kits for your application and most also carry a CARB exempt number. Some even have certificates that say it won't void a car's warranty if the boost level is kept down to about 4 or 5 psi. These kits aren't cheap though and can easily run anywhere from $2,000 on up to about $4,500, but expect about a 75 to 200 HP increase on pump gas, and everything fits under the hood. It's instant power, 24-7-365 with no bottles to refill or buttons to push. You just mash the gas and hang-on! These superchargers are also a great choice for trucks (both 2 WD and 4 WD) that tow trailers or pull steep hills up in high altitudes. No more bogging down or trying to keep up with the flow of traffic while pulling that heavy trailer once you've bolted one of these on. Just like nitrous; if you keep the boost in moderation, your engine shouldn't have any troubles handling it, even bone stock engines.

Those are the 2 best ways that I can recommend for a real horsepower increase on a smog legal engine. You can do all of that other expensive bolt-on stuff if you want and "run with the pack" like everyone else, or you can do what really works and blow their doors off. Just remember, I didn't built my reputation on building Bad-Ass engines and nasty cars that only "run with the pack". You have to do more than what the other's are doing to leave the pack behind.