I have a 55 Chevy that I am building for the street. What’s a good engine to go with? 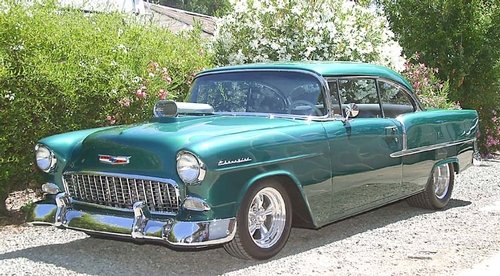 Those are heavy cars which need "torque" to get moving. What you don't want to do is confuse "horsepower" with "torque". Torque is what moves the vehicle from 0 to 60. Horsepower only comes into play when RPM's are above 5,200 and beyond. How often will you be driving at or above 5,200 RPM? Around town? Down the freeway? At a cruise? From stop light to stop light? It's pretty rare, and people who want a "fast car" only think about times they are going to be at wide open throttle. We'll that is about one tenth of one percent of the time, so most people have engines that they think sound nice and that may go OK when you are way up in its power band, but the truth of the matter is, my wife's 4.4 liter X5 BMW will blow the doors off of most of those "hot rods" from stop light to stop light with a car load of kids and the A/C on. That's because car manufacturers took into consideration how that car was going to be driven 99% o the time and designed that into it.

The fatal mistake 98% of all hot rodders make is looking at horsepower numbers and not paying attention to how much torque an engine makes, and at what RPM it makes its best torque curve in, (not even getting into the issues of over carburetion and over camming of the engines most of the have).

Sure, 400 Ft. Lbs of torque is a respectable number when talking cars, but when you are trying to move weight, and accelerate, you need raw torque. This is why big block cars feel so much faster than small block cars, and why big block cars with almost the same "horsepower" rating as the same car with a small block did much better burn outs and "felt" much faster around town. This is because big block cars made much more torque because of the added stroke in the crank, which gives it more "leverage", much like the difference between using a ratchet and a breaker bar. A 6" ratchet can remove a bolt fast, but it can't break loose a stuck bolt. Consider that stuck bolt "weight". You need more leverage to move that weight. "Torque" is very much like a breaker bar in that it may not remove that bolt very quickly (because of the long swing), but it removes it much more easily. The trick to removing stuck bolts quickly is finding the right sized wrench that has enough length (stroke) to break the bolts loose, yet still be short enough to move quickly (horsepower). Once you find that combo, you have a perfectly matched wrench for that job, much like a perfectly matched engine for your particular car. My expertise is designing engines that match the torque and horsepower to the particular customer's needs. This is why when you put a car that has an engine in it that I built, against one with your typical generic crate engine in it, that crate engine car gets its doors blown off every time. There is no "one" perfect crate engine that fits all vehicles. If only it were that simple.

So with that, I would recommend something designed to make more torque than horsepower so you can have fun with that car and not have it fall on its face when you nail it off the line. This is mostly done by adding stroke to the crank to increase the leverage, along with heads that have runner sizes to keep the velocity up along with a cam that makes a good, flat torque curve so that baby pulls hard.

I would recommend going with a 383 small block. I don't like building those though, and when I do build them, I ONLY build them one way, with a small base circle billet steel roller cam. Most other shops simply grind on the rods to make clearance, which is about as asinine as you can get. It messes-up the strength and integrity of the rod, but it's a cheap way of gaining cam clearance for the crank. I don't build "cheap" engines, not with MY name on it anyway, so if you want me to build you a small block for it, you have choices of a nicely built 350 (which will move that car like it's never moved before), or I can build you a killer 383, but it has to be the way I build it, or I simply won't do it.

You can be into a 350 for anywhere from the $4,000 or so area, on up to the $8,000 or so area, depending on what's in it and what's on it. A 383 would run you in the $8,500 - $9,000 or so area, again depending what's on it. It can go up from there by adding things like polished aluminum pulleys, polished water pump, fuel pump & custom made fuel lines, alternator & brackets, etc. Not as "cheap" as most generic crate engines, but then again, those don't come with any of that stuff either so you have to take their price and add all of that stuff to it.

Think of the quality of a generic crate motor as making something as simple as Macaroni & Cheese. Making the instant kind that comes out of a 49 cent box ain't like making home made macaroni & cheese from scratch using fresh high grade pasta and high grade cheese and then baking it until it's all nice and melted. It takes much longer to make. It cost a lot more, and it is much better quality.... plus it tastes much better. It's all relevant, you pay for that kind of quality, ingredients and preparation time. You get what you pay for either way. Most guy's are content with a "hecho en mexico" generic crate engine in their car (which is why there are SO many crappy "hot rods" out there these days), and other guys want something with a bit more quality, strength and performance.... and that's what I build. There ain't any 49 cent boxes of macaroni & cheese in my shop.