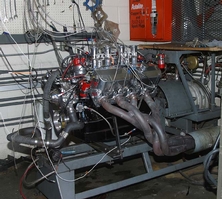 It all depends on the dyno and how it is reading and computing the power / load ratings. There are "inertia" dyno's that give a particular number, and there are "load" dyno's that give an entirely different number. Why do they do this you ask? If you took a typical DynoJet dyno (chassis dyno) and ran a car on it, it would give you a given number based on inertia and the spool-up speed of the drums. If you took that same car and put it on a Mustang Dyno or SuperFlow "load" dyno, you would get a much lower number simply because they are measuring power under different circumstances (under a load).

There is typically a 140 or so HP difference between an inertia dyno and a load dyno. Then you have to take that number and divide it by .85 to get the close approximation of power at the flywheel. Now, some people will argue about the .85 number and say you just need to figure on about a 60HP loss through any typical chassis, so you simply take the rear wheel power number and add about 60 to it and you'll be in the ball park, but most dyno shops will tell you it is an average of 15% -%&aymp;nsp;loss through the chassis (on average). Well, .88 to .85 IS 15% -% w you are doing the math.

Your car made 290 RWHP and you blew the doors off of two new Vette's which are quite powerful cars and run fairly easy 12 second quarter mile times. 290 HP isn't enough to run 12's in the quarter mile, not even with a hurricane for a tail wind, so I have to assume that your 290HP was a "loaded" HP reading. If it wasn't a loaded reading, then your engine was only making 341 Flywheel HP (BHP) and that just isn't a number that is very capable of blowing the doors off of two new Vettes, so it had to be a loaded number.

So, 290 RWHP under a load, plus the 140 variation you normally have between inertia dynos and load dynos = 430 non loaded RWHP. Take that and divide it by .85 and you are making in the neighborhood of 505 BHP (at the flywheel).

Just for the sake of argument, some people say to only add 60 HP to make-up for the loss through the chassis. OK, then you take your 430 non loaded RWHP and ad 60 more to it to compensate for chassis loss and you come out to 490 BHP. That is pretty damn close to the number you get when you divide by .85. Which one is more accurate? Honestly? I don't know, (and couldn't know), unless we first dyno'd the engine and then stuck the engine into the car (making NO tuning changes or modifications) and running it on the chassis dyno and seeing what we got as far as a difference between the engine itself and the loss through the chassis.

The bottom line here is simple. You certainly can't blow the doors off of two Vettes with 290 RWHP unless the two guy's in the other cars didn't know you were racing them. 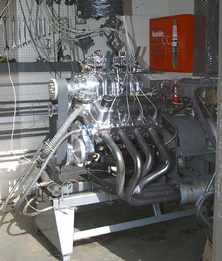 While we're at it, let me explain something about engine dynos. People say dynos don't lie. Well, they don't... but the people entering the aquisition data DO, and if they fudge the numbers here or there (barametric pressure, relative humidity, air density, air temperature, the amount of water being fed to the water brake, etc.) then the dyno can only compute what it is told to compute. So in reality, no... the dyno won't lie, but it will give bogus readings if the data isn't accurately fed into the machine.

Let me tell you a quick little story. I got this call from a potential new customer. He runs a car on the open track and it's a 383 Chevy with mildly ported iron heads. He said it dyno'd at 538HP with 9:1 compression and ran on 91 octane fuel. I said that was hard to believe so he sent me his dyno sheets and sure enough, it said 538HP BUT when I looked at the atmospheric pressure reading, it was at 20psi!!!

Let me explain something; on any given day, we have 14.7 psi of atmospheric pressure. Engines don't actually "suck-in" fuel and air. It is actually blown-in by the amount of atmospheric pressure we have around us. Just like you don't get sucked out of an airplane if the fuselodge gets a hole ripped in it. You get blown out. There's no vacuum in the air at 35,000 feet! There might be a vacuum in space but planes don't fly in outer space, they fly INSIDE out atmosphere. The presure is very low way up there (because there's no air), so to protect your ears (and so you can breathe) they pressurize the cabins with air pressure and oxygen. Well, if a window pops out of the plane, all of the air (about 8psi worth) all wants to go out, and it "blows you out" with it.

OK, back to engines. So the atmospheric pressure actually blows air into the engine. If you increase the atmospheric reading on the dyno, it will calculate (correct) the power number to make-up for the data that you fed into the data acquisition system. This system is sometimes called a "D-Pack"

So, the dyno didn't actually lie but the data fed into the machine certainly did. This is how magazine articles inflate numbers on dyno's, how cheapie engine can look good on the dyno and how you can "fudge the numbers" on a dyno to make it look like the engine makes more power than it actually does.

Now for DeskTop Dynos. You can calculate just about anything with math. All Desk Top Dyno's do is crunch numbers. What they don't do is take into consideration things like "velocity", port matching, exhaust physics, air / fuel ratios, hot day air as opposed to cold day air, humidity, and a zillion other factors math simply can't figure out unless you know those infinite numbers and put it in there to figure it out. The problem is, there is no place to put numbers like that in there.

You can put in a 283 engine with a 600 cfm carb into a desk top system and it will give you a power number. You can take that same 283 configuration and bump-up that carb to 10,000 cfm and guess what? That DeskTop system will show that it makes much more power. The reality of that is... its bullshit! Those little systems are Ok for calculating valve timing figures and "approximate' power numbers within a given scale, but they certainly can not replace the real thing or else all of the major engine building shops out there would sell their dynos and buy the $40 systems on a CD ROM and call it a day. It doesn't work that way and big shops still use VERY expensive dynos for a reason.

Someone once asked me; "Arron how come your 400HP 350 ate-up my buddies 500HP engine at the race track? I just tell them; "It's because my dyno measures horsepower using Clydesdale horses. Those other guy's measure their engines with Shetland Ponies!" LOL!