Is it OK to run aluminum heads on the street? 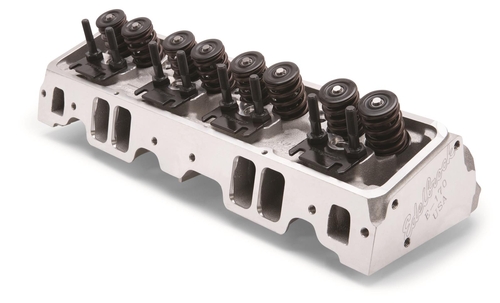 Aluminum expands almost twice as much as cast iron. A couple of decades ago (boy I feel old), all heads were machined the same way as they machined the cast iron engine blocks, with a slightly rough surface to grip the head gasket. Well, aluminum heads, with their greater expansion rate, were actually skating across the head gaskets like a draw file and the little machine marks left by the bits would cut, or wear through, the head gaskets after being heat cycled a bunch of times. Now, when you look at aluminum heads, the deck surface is almost totally smooth, so as the head expands, it doesn't scrape across and into the head gasket causing it to fail. The big advantage with aluminum heads, besides being almost half the weight of cast iron, is that they run cooler and allow you to run a little more compression (or cylinder pressure) on the same gas without pinging or detonating.

Another great thing about aluminum cylinder heads is that they are repairable. If you had an engine catastrophe and the combustion chamber got beat-up by a valve or whatever ended up in the cylinder that Mr. Piston shoved around and into the face of the chamber, you can TIG weld it and machine it back down and it's as good as new again. You can't do that with cast iron heads. Sometimes cast iron heads "can" be repairable with a very expensive oven welding process where they heat-up the head until it's white hot, then they quickly weld the crack or defect with cast iron rod, and then get it right back into the oven again to heat it back up, and then they slowly let it cool over the course of 24 hours or so, but even then, it's not a guaranteed fix, where TIG welding A356 aluminum (which pretty much all aluminum heads are made out of) with 356 aluminum welding rod is as routine as stick, or MIG, welding mild steel. Everything about aluminum cylinder heads is better than cast iron.