What can a high stall converter do for you? 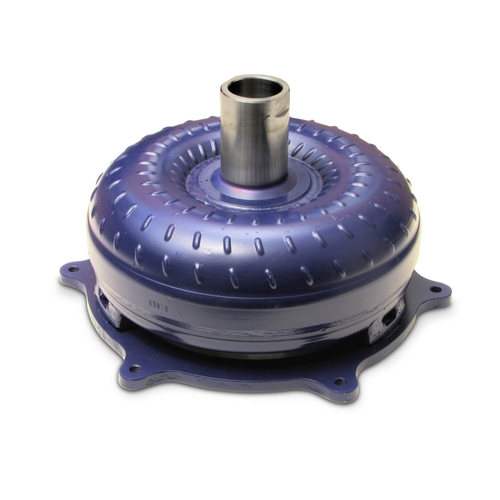 One of the biggest bangs for the buck you can buy is a stall converter. Most of the "daily driven" street cars we build have anything from 2,400 on up to a 3,500 stall converters in them and they are very streetable with no problems. On more radical street / strip cars we'll sometimes use a 4,000 RPM stall. It just depends on the car, the engine, how it's going to be driven and several other variables such as car weight, rear-end gearing, engine torque at a given RPM, etc.

There are a lot of people that will volunteer their opinion and "expertise" about stall converters by saying that you'll burn-up your tranny by running one on the street. Hey, large GM trucks (bread trucks, UPS trucks, motor homes, etc.), use converters called GM-6 and GM-9 that stall out between 2,800 and 3,000 RPM, and those are on severe duty vehicles that see a hell of a lot more driving time than your performance car ever will! See ay of those on the side of the road with burned up tranny's?

Let me set the record straight on another issue too. Just because a stall converter may have a 3,000 RPM rated stall does NOT mean the car won't move until it revs to 3,000 RPM. We run 6,000 RPM stall converters in most of the race cars we build, and if you put those cars in gear at an idle and let off the brake, the car will roll forward just like any other car will with much less stall in the converter. We cruise through the pits at about 10 MPH idling in 1st gear with 6,000 RPM converters, so how could it be that the car won't move until it revs up to 6,000 RPM. It's just a wives tale like all of the rest of them out there that seem to never go away.

All "stall" means is if you mash the brake and gas at the same time, (or get on the trans brake), it allows the engine to rev up to "about" the stall RPM it's rated at before it breaks the tires loose. If you are just sitting at a stop sign and you take off normally, the engine will indeed rev up a little higher than a car running a stock converter, but not all the way to it's rated stall RPM before it starts moving by any stretch of the means. For the most part, the car will drive quite nice until you mash the gas, then the converter will allow the engine to "flash" up in RPM, which is like putting in a clutch - reving the engine and dumping it.... all hell breaks loose!

Let me clear another thing up here. Determining the stall in a converter is NOT an exact science. You can buy a 3,500 RPM stall converter and not see 2,500 RPM of stall if your engine has no torque. On the flip side, stick that same 3,500 RPM converter behind a big cubic inch big block that makes gobbs of torque and you could see more like 4,000 RPM of stall. It's all dependant on how much raw torque your engine produces.

The cool thing with stall converters is they provide a "cush" for hard parts, (U-joints, gears, axles, etc), where a manual transmission car is really hard on that stuff because of the "impact" clutches with a good bits have. A stall converter is a bit more gentle on those parts because of the "slip" it has.

Stall converters allow the car to launch in it's torque curve and get off the line much harder than a car that has much less stall. Let me explain this a little more here. If you have an engine that makes 500 Ft Lbs of torque at say, 4,000 RPM, and you want that car to launch as hard as it can off the line (providing you have good traction), you'll want a stall converter with about 3,800 to 4,000 RPM of stall. If you ever look at a dyno sheet and see that most hot performance and race engines build their torque and power at higher RPM's, you'll understand why a higher stall converter is needed. If you want to launch the car hard and it makes its peak torque power at 5,000 RPM or so, you wouldn't want to select a 3,000 RPM stall converter where it might make half of its power would you?

If you took that same hot street / race engine and put a stock converter behind it with a typical stock 1,100 RPM of stall, that engine will fall on its face because the converter is locking-up at such a low RPM, the engine comes under a full load at about 1,100 RPM where that engine makes no power at all. It's like trying to take off in 3rd gear in a car with a manual tranny. Does any maunal tranny car launch hard off the line in 3rd gear? Hardly. It would literally stall and fall on its face unless you rev it up and slip the hell out of the clutch to get moving.

Performance and race engines don't make much power at 1,100 RPM, in fact, most of the idle at or above that, so a car with a stall that low will bog down and launch slower than mom's SUV will when it's full of kids.

Performance and race cars use lower gears and higher stall converters for a reason. You can have the biggest, baddest engine in your car but if your gearing is too tall and your stall isn't high enough, it WILL be a comlete turd off the line and it won't accelerate very well. Most guys who THINK they have bad to the bone cars but don't perform very well at the track usually have carbs that are too big, gears that are too tall, and a stall converter without enough stall.

Whenever you install a higher stall converter, be sure you use some sort of an external tranny cooler. When you are "stalling out" your converter, such as being at the line at the drag strip ready to launch, they build up a LOT of heat from hydraulic friction. That heat is what cooks tranny's, so you need a good cooler. Once you know where your engine makes good torque, (RPM), you can use that number to determine what size of a stall converter to go with that best suits your needs. It really isn't rocket science.