Is a 600cfm carb too big for a street engine? 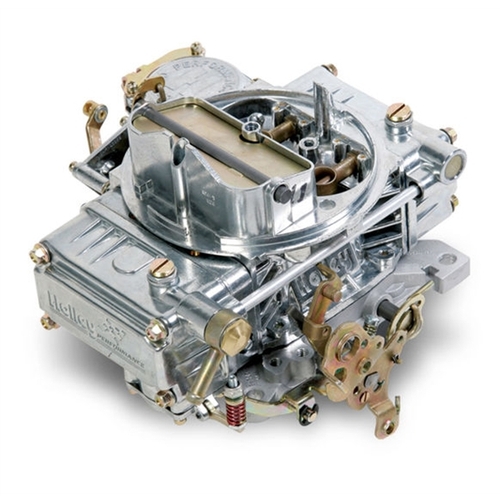 That's a trick question. It depends on what kind of a carb it is. Is it a vacuum secondary or a double pumper? Is it a stock engine or a performance engine. Do you have a manual transmission or an automatic? These are all factors when choosing the right carb. Before I start, let me remind everyone of this. NASCAR engines have over 750 horsepower and spin between 8,000 and 9,000 RPM for 500 laps and they run a 390cfm carb! That's right, 390cfm! First of all, lets take a 600 double pumper, like Holley's #4776. It's a great little carb but as the throttle is pulled back, the primaries begin to open and a shot of fuel gets squirted down the throat from the primary accelerator pump. When the primaries get about halfway open, the secondaries begin to open (mechanically) along with another shot of fuel through the squirters, from the second accelerator pump, hence the name "double pumper". This is all fine and dandy unless you've got an automatic transmission, a heavy car or high rear-end gears and you stab the throttle off the line. The engine will probably choke, cough and spit before it sluggishly starts to go. I call this "flushing the toilet". The key here is air speed or "velocity", or rather lack of it! Picture this, take a shop vac and feel the suction at the end of the hose. Now make the hole smaller. The air being sucked in speeds up! This is an increase in velocity. If you remove the tip and make the hole bigger, (like increasing the size of the carb), the air speed slows down and it won't pick-up any dirt off the floor. Double pumper carburetors act similar in that when the throttle is stabbed, all 4 barrels open-up at once and the air speed slows way down because the engine lost its velocity. An engine can't go unless air (and fuel) are going into it! The faster the speed, the quicker the pick-up! Without much air speed the carb can't deliver its fuel. You have to remember; fuel is siphoned-out through the boosters. It isn't pressure fed, so a fast air speed makes the carb more responsive and delivers fuel better, plus a faster air speed makes the engine react quicker and have better throttle response when driving.

Now lets take another 600cfm carb, Holley's #1850. This is a vacuum secondary carb which has only one accelerator pump, and secondaries that open via air speed passing through the carb. When the throttle is hammered, only the primaries open. This allows a faster air speed to feed the engine and no "toilet flushing". As the air passing through the primaries speeds-up, it passes over a small tube that acts like a siphon. This siphon is attached to the secondary diaphragm which opens the secondaries "on demand". They won't open-up until your engine says "Hey, I need more!". When they open, the air passing through the secondary side of the carb draws the fuel it needs through the rear jets, or in some cases a metering plate. No bogging or dogging off the line!

Here's the deal on carbs. You can take a general V-8 engine and put a 650 double pumper carb (Holley #4777) on it. It will drive OK but probably be a turd out of the hole and get horrible gas mileage. You'd be much better off with a 750 vacuum secondary carb (Holley #3310) instead. Yes, CFM wise it's bigger, and technically it is overall BUT, because it is a vacuum secondary, you are only driving around on the primaries, even if you nail it to the floor off the line you are only opening the primaries. This means you are actually driving around with a 375 cfm 2 barel until the engine pulls enough air speed through it to open the secondaries. So, is driving around with a 375 cfm 2 barrel too big of a carb for your engine? Hardly! Always remember this; when you put a carb that is WAY too big on your engine, it will actually run LEANER than it will with a smaller carb. This is because it takes AIR SPEED to PULL fuel through the boosters. Remember that shop vac analogy I used earlier? Putting too big of a carb on is like removing the tip from your shop vac hose. The engine takes a big gulp of air but it can't siphon fuel through the main jets and past the boosters because tyere is no air speed to pull it through. Carbs don't GIVE the engine fuel with pressure. The engine pulls fuel through the carb via a "venturi effect' and velocity. No velocity = a lazy carb, no fuel delivery, and a sluggish engine, especially at lower RPM's.

The secondary opening rate of a vacuum secondary carb can be adjusted by changing a spring inside the diaphragm housing. It can be made to open sooner (with a lighter spring), or later (with a heavier spring) depending on how much air it requires to overcome the spring tension on your particular engine. It's a hell of a lot better than your foot trying to do it for you by "flushing the toilet" with a double pumper carb, unless you have really low gears, a high stall converter and/or launch and drive at higher RPMs. In reality, vacuum secondary carbs work much better on the street and at the track in most street/strip cases. The engine will rev faster, the car will launch and pull a lot harder, and it'll get better gas mileage! In most mild street performance engines a double pumper is NOT the way to go and the cfm rating is NOT the same as the cfm rating of a vacuum secondary carb because of the way they work. If you have to "feather the throttle", your carb is probably too big. You don't want to be a dog off the line... always remember... 80% of the race is the first 80 feet!