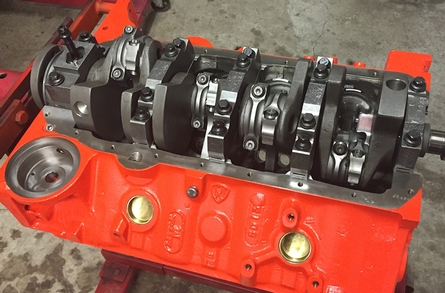 Lets start with what a 2 and 4 bolt main is anyway. What holds your crankshaft in place are the main caps. These are what the crank bearings sit in. Most engines have 5 caps. A 2 bolt cap is fastened to the block with 2 bolts, and a 4 bolt cap has 4 bolts (2 on each side). Sometimes the outer bolts on race blocks are splayed. In other words, they go in at an angle, as you can see in the picture of this Dart Sportsman race block. This adds to the "pulling" strength of the bolts, or at least that's the theory anyway.

Main caps are the only thing keeping your crank from falling out the bottom of your engine. When you increase the load on the crank, you inherently increase the load on the main caps. Any time you increase horsepower, torque and cylinder pressure, you increase crankshaft load. It would take quite a bit more stress to rip-out 4 bolts than it would just 2, so that's why the 4 bolt mains are stronger than the 2 bolt mains. This is the theory behind it anyway. I have to say though... I have never seen a crank get "blown-out" of an engine, be it a 2 bolt or a 4 bolt main engine. I have seen engines "blow-up", leaving pieces of crank and engine block all over the track, but that's usually due to metal fatigue and failure somewhere else and not the main caps themselves blowing-off.

I have also seen 2 bolt main engines in low budget race cars running 9 and 10 second et's that last season after season. The more compression / cylinder pressure an engine has, the more the crank is trying to be pushed out the bottom of the engine, especially when a blower or nitrous is used. 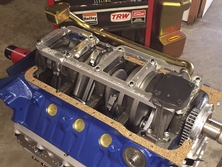 Sometimes you can't get a block with 4 bolt mains so a way to make a 2 bolt main block even stronger than a typical 4 bolt block is to use a "main support". This is a brace that bolts across all 5 main caps, thus tying them all together and sort of creating a 10 bolt main engine. The theory behind this is simple, if one main cap tries to walk, move, flex or come-off, it has to take all of the others with it at the same time because they are all inherently attached to that main support. It disburses the load across all of the main caps evenly. One can't move or come out without taking the other 4 with it because the brace ties them all together. It's the same theory behind a stud girdle that hard core race engines use on rocker studs to prevent individual studs from flexing and breaking, or pulling out. You can see what a typical billet main support looks like in the image to the left. These are common with Ford engines, especially when building big strokers so that extra weight and leverage of that big stroker crank doesn't rip and pull at all of the main caps causing bearing failure... or worse.

If you are going to be building a street engine that has 11:1 compression or less, then a 2 bolt main block would be just fine. Anything higher than 11:1 or so, or if you are going to run nitrous or a blower, then I would definitely recommend a 4 bolt block, or a 2 bolt block with a main support on it just to be safe.

How about the famous Shelby GT-350's? Well ALL of those were 2 bolt main "K code" 289's that were worked-over by Shelby Motors to 306 HP for the S model cars and 360 HP for the R models who routinely saw 6,000 - 7,000 RPM use. Now ask yourself, how many Vettes, early Z/28's or Shelby's have you ever seen on the side of the road with the cranks blown out? How many vintage races or SCCA events have you seen any of those cars blow a crankshaft out onto the raceway? I'm not saying you should go out and build a race engine using a 2 bolt main block, but I want you to understand "reality". If you're building an engine that is going to be making 400 HP or so in a small block, or upwards of 450 or so in a big block, a 2 bolt main block will be just fine if it is set-up well, especially if it's a short stroke engine. Big stroker's are another story... if you are wanting a Chevy 383 stroker, I would suggest using a 4 bolt main block simply because of the longer stroke.

Now, the 351W Ford's on the other hand are only 2 bolt mains but I would venture to say that they are stronger than a 4 bolt main Chevy. Why? Because the main caps are about 50% ticker than a Chevy, and the 2 bolts they have are huge 1/2" bolts, not little 7/16" bolts the Chevy's use. The engine in the image with the main support is one of the common 408 cubic inch strokers I build for people for their Mustangs, Cobras, etc based on a 351W block and fitted with a huge 4.000" stroke crank. In MILD trim with decent heads and a small hydraulic roller cam they'll typically dyno in the 520 - 530 HP area and a whopping 540 - 565 Ft Lbs of torque area, which is why you really need to run a main support on something like that if a 4 bolt block isn't available.

So as always, when dealing with subjects like this, you have to compare apples to apples and take everything into consideration, not just what's on the surface.