Should I have my engine balanced and blueprinted? 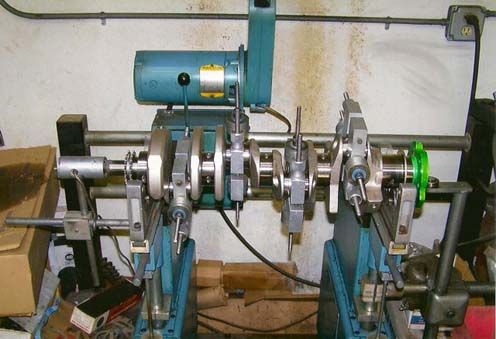 This one is a 2 part question. First the balancing. If you are doing the rebuild using all factory components, then balancing is not absolutely necessary unless you want it to be the best it can be.

There are 2 ways to balancing an engine. The first is weight matching. This is done by weighing all of your pistons on a balancing scale. Once you find the lightest one, you then remove a little metal from the others (in a place that won't weaken the part) until they all weigh the same. Parts are usually measured within a quarter gram. This procedure is then done to the connecting rods. Once they are all done, then the rod is weighed on a balancing fulcrum which determines how heavy the rod is at either end. If one rod is a little heavier on the big end (where the bearing goes) than another, a little weight is removed from the heavier one to balance them out. After that is all said and done, the next step is dynamic balancing. This is when the rotating assembly (crank, rods, pistons) are put on a machine (sort of like a tire spin balancer) and the counter weights of the crank are weighed against the piston/rod combo. If a light weight set of rods and pistons are used, then usually a little material needs to be taken out of the crankshaft to even it out. If a heavier set of rods and pistons are used, then weight usually needs to be added to the crank weights. This is done by drilling holes into the crank counter weights and pressing in cylinder shaped slugs of heavy metal known as Mallory metal to increase the weight. Street engines do not necessarily need balancing. Except for a couple of rare occasions, almost no factory engine ever came fully balanced, even most "performance" engines weren't balanced. Balancing helps an engine run smoother with less vibration which creates less havoc on main bearings and helps things last longer.

Blueprinting is an interesting term. Almost no engine is blueprinted. Blueprinting means following a set of specs to the "T". Most serious race engines such as Indy, NASCAR, Formula 1, etc. are blueprinted engines. Most teams have several back-up engines and every single one is identical to the other in every way. Blueprinting can also mean (loosely) building an engine by following a set of factory specs. The only problem with this is that there are given areas of tolerances, not just one specific number. For instance: A blueprinted set of engines will have EXACTLY the same crank clearances. They will have exactly the same amount of piston to cylinder wall clearances as well as ring gap clearances, cam timing, head port and chamber volumes and so on where as a factor spec book will have "tolerances" that vary slightly. A blueprinted engine will call for .00275" main bearing clearance where as a the factory specs say anything from .0015 to .0030" is "within spec". There is no "within spec for blueprinted engines! It either is or it isn't and there's no in between. If you blueprinted two engines by the factory specs, there will always be variances between rod and main bearing clearances, piston clearances, deck height differences, valve spring pressure differences as well as Intake and exhaust port and chamber volume differences. It takes pain staking hours to truly blueprint an engine and for what? A ton of money and really nothing gained unless you are running the exact same car at the exact same track and you need to go the exact same speed as you were with the last engine.

If you want to learn more about balancing, I go into pretty good detail about it in my "Rotating Assemblies" DVD set.