Is it better to de-stroke or increase stroke on an engine for more power? 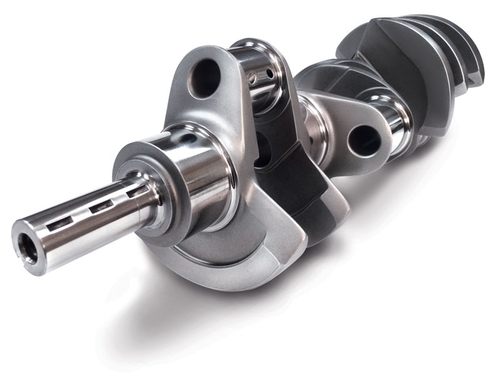 There is no single correct answer to this question and we need to determine what "power" really means. The rule here is "leverage". Think of it like this. Picture your crank being like a wrench. If you are trying to loosen a bolt and you have a short wrench, it's going to be pretty hard to break it loose because you don't have enough leverage, but once it is loose, you can turn that short wrench pretty fast and remove that bolt quickly. Now, if you get a longer wrench, you'll be able to break that bolt loose pretty easily but once it's loose, it's pretty hard to turn that long wrench very fast. So it's kind of a catch 22 situation. Cranks work exactly like that. A longer stroke makes for greater leverage which equals more torque. A long stroke acts like long wrenches, making it easier for the engine to pull a heavy load but in return, it can't spin very fast because of the reciprocating mass. A short stroke makes an engine rev fast because of less reciprocating mass but it's like that short wrench, it's makes it tough to pull heavy loads or make much torque being that there's less leverage. Let's apply this to specific engines and determine if increasing or decreasing stroke is better or even worth the effort in the first place. If we use a Chevy 350 (3.48" stroke) and want to de-stroke it by 1/4" (3.25" stroke) you end up with a 327. By de-stroking a half inch (3.00" stroke) you end up with a 302 made famous by the early Z/28's. A very high revving small block that made pretty good power at high RPM's but had almost no low-end power at all. By up-stroking the 350 engine by 1/4" (3.75") we end up with a 383, which is notorious for making good torque at low RPM's and being able to rev pretty well but not as high as the shorter stroked engines. Stroking Ford's is another story. You can up-stroke a 302 and end-up with a 347 or even a 357 cubic inch engine, but that's a pretty expensive way to go when compared to the 351W which is way stronger than a 302 ever thought of being and is only about 1" wider overall. If you add stroke to a 351W, you can end-up with a 396, a 408, and a 427 in a small, light package for the same money it would take to build a smaller and weaker 347. There are many other factors involved in stroking such as faster piston speeds, increased rod angles and so on, that would take page after page to go into. . If you have a heavy car and/or tall gears, you're going to need a lot of leverage to make that car move. If you have a light car and/or short gears, you can utilize less leverage and spin it faster. If you can just remember the basics of "leverage" you'll be able to understand it all a little better and choose which way is best for your application.

Now, let me say something else on this. An engine is nothing more than an air pump. The displacement of the engine is merely the size of the pump. The whole object to making power is to pull-in a given amount of air (what an air pump does) and mix it with fuel. The more air you can pull in with a given mixture of fuel, the bigger the bang, which = more power. A small air pump is going to have to spin much faster to take in an equal amount of air that a larger air pump can do by spinning slower. So think of a little 327 Chevy and how high it's going to have to rev to pull-in the same amount of fuel and air as a 454. For every rotation of that 454, it is taking-in 127 more cubic inches of fuel and air. So for a 327 to make the same amount of power as a 454, itis going to have to spin much faster. Obviously at say, 6,000 RPM each engine is taking-in a given amount of fuel and air, so it is pretty obvious that the bigger 454 is simply going to make more power at a lower RPM. These days we are adding big stroker cranks to smaller engines and are getting 454 cubes out of small blocks, so a 454 cubic inch small block won't have to rev any higher (per say) than a big block 454 would because 454 cubic inches is 454 cubic inches. This is why in days gone-by, small blocks had the be reved to super high RPMs to get the kind of flow needed to make any decent power. We don't need to do that these days because of better flowing heads, better cam profiles and more displacement via stroker cranks.