Are high volume oil pumps OK to run on the street? 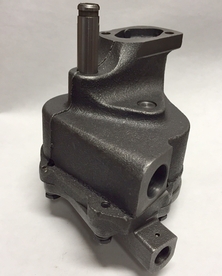 I get asked this one from time to time, and the answer is, it depends on the engine. First off; why do you think you need to run a high volume oil pump? The reason performance and race engines use them is because the clearances are upwards of twice the amount as a stock engine. Those voids flow oil out much quicker so they need more volume to stay filled with oil.

A typical stock engine has about .001" - .0015" of rod and main bearing clearances. When you get into more serious engines you will find rod clearances as much as .002" or more, and crank clearances upwards of .0025" - .003" or more. This is also why in the older days, race and performance engines used to run much thicker oils to help "take-up" all of that space. It was common to see straight 40wt and 50wt race oils in engines back in the day. Now days, with much better oils, we tend to run tighter clearances and much thinner oils. We've learned that thinner oil gets to where it needs to go much quicker and with less effort than thicker oils. Larger clearances on serious performance and race engines drain-out quicker so you need a pump that'll push more oil volume into them to keep those larger clearances full. Stock or mild performance engines don't really require that much oil flow because the clearances are much less and therefore "flow" oil much less.

You can't pump oil where it doesn't want to go. In other words, unless your crank and rod clearances are a lot more than a stock engine, then oil simply isn't going to flow and all you are going to do is make a lot of oil "pressure" but not much additional "flow". There's a HUGE difference between "pressure" and "flow". Contrary to what most guys believe, pressure is actually the negative result of flow. If you had full flow, you would have very little oil pressure. What happens when you eat a rod or main bearing?  Your .001" - .003" clearance got chewed-up and is now .020" - .030", or basically ten times more than it is supposed to have, so now you have a huge amount of clearance that oil is just POURING out of. It's like slicing into an artery in your body, blood openly flowing out drops your blood pressure.

Other than the noise of a knocking rod or a squeaking "spun" main bearing, how can you tell when you have a bad bearing problem? The pressure reading on your oil pressure gauge drops WAY down. This is because you've opened-up that clearance way too far and now oil is just pouring out that huge space, which causes the pressure to drop way down. So, you increased the flow, and as a result, decreased the pressure.

Pressure can basically be looked at as "effort". How much effort is the pump going through to push that oil. The thicker the oil, the more the effort, and... the tighter the clearances, the more the effort to push oil into those tight spaces. Just because there is effort there (higher oil pressure) doesn't mean more oil is actually flowing. This again is especially true with thicker oils and why thicker oils create more oil pressure. Let me put this is terms even a kid can understand. Go to the local fast food joint and buy 2 drinks. One soft drink and one milk shake. Take a sip through the straw of the soft drink, now take a sip from the milk shake. It's a hell of a lot harder to sip that thick milk shake up through that straw than it is to sip-up that watery soft drink, right? Oil pumps and oil thicknesses are no different. You increased your effort to sip that milk shake and yet got much less of it into your mouth than you did the soft drink. That's exactly the same thing with oil pressure and oil flow vs. clearances and oil thicknesses, vs. oil volumes and pressures. if you want more milkshake with less effort, get a bigger diameter straw, which is like opening-up clearances on your engine, OR wait until the milkshake gets a bit warmer and thins down a bit. This is exactly like oil pressure dropping when your engine warms-up. It's because the cold, thick oil is requiring more effort (pressure) to push it into those clearances, but when it warms-up and gets thinner, it requires even less pressure, yet your FLOW increased. People seem to think this is such a complicated subject, but it really isn't at all. 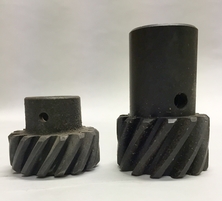 Another thing is that higher volume oil pumps put much higher loads on the gears that are driving them, meaning the distributor and cam gears. Chevy engines can handle the higher loads of high volume oil pumps just fine, where most Ford's have troubles. Why? Chevy's use a much larger gear than a Ford does, in fact, it's about twice the size, which means it's about twice as strong. The distributor gear is what takes the load of spinning the oil pump. The more volume you pump through an engine, the more load gets put on that gear. 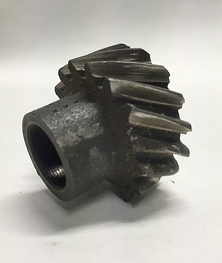 Ford gears tend to get eaten-up because they just aren't big or strong enough to take the load that a high volume pump puts on it. Once you eat-up a distributor gear it is pretty much disaster for the cam gear as well. If you wipe either one out, count on having to replace the cam shaft! This doesn't even get into all of that metal going through the engine, which doesn't help things like bearings and such. 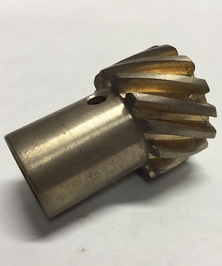 We tend to use stock oil pumps on Ford's and high volume pumps on "performance" Chevy's where the clearances were opened-up a bit. On race prepped Ford engines that we run high volume pumps on, we use aluminum-bronze gears and just keep a close eye on them for premature wear because they WILL wear out in a short amount of time. In fact, that's what aluminum-bronze gears are designed to do... wear-out instead of the expensive cam wearing out on you. Technology has advanced a little these days with the invention of composite gears. They aren't made out of metal, they're made out of a material that is kind of like carbon fiber and are practically indestructible. The cool thing is they are compatible with all types of cams, from cast iron to billet steel, where before... if you didn't have the right type of gear on your distributor to match the type of cam you had, you were looking at disaster in a short amount of time.

When the 5.0L engines came-out with steel roller cams, they also went to steel distributor gears which are much stronger than the older cast iron gears, but they are still about half the size of a GM gear, so it is still about half the strength, which means you still have to be careful if you want to run a high volume pump. A lot of guys get away with it, but that's just it... they're "getting away with it". In other words, we still see a lot of guys NOT get away with it and then they have a serious and expensive problem to deal with. Going back to everything I explained above, did they really even NEED a high volume pump in the first place? Most likely not. If they wanted more flow, they should have probably just ran a thinner oil which would have increased the flow and not put undue loads on the cam and distributor gears.

Now, some people will say to run a stock pump because it won't rob as much power from the engine as compared to a high volume pump, but they install the "high pressure" spring in it to make more pressure. In some cases, pressure makes volume, but again, volume = load. If you ever forget to hook-up your oil pressure gauge line and you fire the engine up, you are going to have a LOT of oil coming out of that tiny little 1/8" line because of the pressure behind it. If there was very little pressure, not much oil would come out. Like I said; pressure makes volume IF there is a means for flow. But again, pressure increases load.

Some people say that a high volume oil pump will pump all of the oil to the top of the motor and basically empty out the oil pan before it can all drain back again. On some engines, such as Oldsmobiles where oil drain back through the heads is a common problem because of the long - small diameter drain back holes, so in cases like that this "could" have some slight truth to it, but 98% of the time, it has no basis. First off; high volume oil pumps only pump about 15% to 20% more oil than a stock pump does. So that would mean that your stock pump is only 15% - 20% away from sucking your oil pan dry. That's highly unlikely. Again, running thicker oils means draining back through long, skinny holes in some of the heads out there (such as Oldsmobiles) MIGHT be an issue because just like that thick milkshake I mentioned earlier, if you turned both the soft drink and the milk shake cups upside down, which one will pour through the straw better than the other? It would probably take (literally) a minute or two for the thick milkshake to even start to dribble out of the straw under gravity conditions, where by that time, the entire soft drink cup would be completely empty. Thicker oils and small drain back holes in heads would have similar results, but in most cases, most engines have plenty of oil drain back holes and areas, so it isn't a problem most of the time.

In a nutshell, 95% of all engines out there, whether stock or mild performance (under 550 HP or so) will do just fine with standard oil pumps, especially if a little thinner oil is used and if the clearances that aren't too loose.