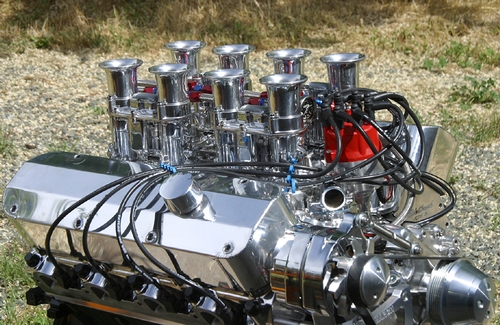 What I consider "streetable" is an engine that runs on pump gas that can actually drive around, cruise and even go on trips. The thing you need to remember is that ANY modified engine is going to have a "quirk" or two. Quirks can be any number of things and are directly related to how radical the engine is. A 350 HP 350 is a fairly stock engine to me and would have very few quirks, if any at all. A 450 - 500 HP (or more) 350 however, will have a few quirks and they will vary depending on the car and driver. Here are a few examples; A radical engine will idle much differently than other cars and will have less idle vacuum. This means that if you have an automatic transmission, you'll probably have too low of an idle when sitting at a stop sign in gear unless you put it in neutral or you installed a "loose" high stall converter, or you blip the throttle here and there to remedy the problem. Low idle vacuum also means that you may have to press on the brake pedal with a little more force than normal if you have power brakes. These are no big deal things, just minor quirks.

Manual transmission cars don't have an "in gear" idling problem, but some radical engines may idle differently from stop sign to stop sign, just depending on engine temperature, idle mixture, outside air temperature and so on. That too is no big deal, just a quirk that you deal with.

Other quirks may be dieseling on a hot day. This is can be cause by several things, such as the carb being too rich which promotes carbon build-up in the combustion chambers that glows when they get hot and act like glow plugs, so when you turn-off the ignition switch, the glowing carbon keeps a couple of the cylinders firing. This is especially prone in high compression engines. It can also be cause by the idle being set too high. This is a simple problem to deal with and can be easily fixed once you know what's causing it.

I did have many customer's that had all-out racing engines in their cars, running on alcohol or race fuel on the street. Hell, there are a couple of guy's with blown alky engines running around on the street in full-on tube chassis race cars with headlights and a license plate! That to me, isn't what I mean by "streetable", even though these guy's actually drive on the street.

The more horsepower you go with, the more you'll need to modify your car to get the most out of your engine. Things like lower rear-end gears are sometimes a must with high HP engines or it might be a dog off the line, regardless of how much HP it's making. If gears weren't that important, you wouldn't see race cars running 4.88"s and 5.13's. They'd be running 3.00 gears instead if they could, but they can't or their engines, (even though they make lots of power), wouldn't pull hard enough.

Other modifications that may be needed could be the exhaust system, the cooling system (horsepower makes heat) and so on. These are simply upgrades to compliment a high horsepower engine, and when you have a matched combination all working together, it's very streetable and very fast, or quick.