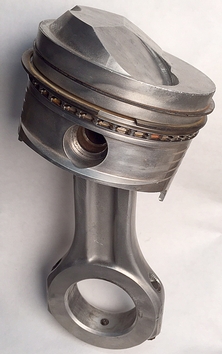 Some people say forged pistons "knock" when they are cold, and that's un-true unless you are running some seriously wide clearances. Less expensive forged pistons and pistons from yesteryear used to have wide tolerances due to the higher expansion rate of the aluminum alloy and forging compared to cast pistons. For instance; a cast stock piston only needs about .001" clearance between the piston skirt and the cylinder wall, where a forged piston might need .005" or .006". That's 5 times the clearance over a cast piston, but even so, it shouldn't make any "knocking" sounds. On some really quiet engines running older style forged pistons, someone with a keen ear may be able hear a bit more general engine noise when the engine is cold and nothing has heated-up and expanded yet, but still... it isn't really noticeable. On a race engine that has really wide clearances, such as a blown or nitrous engine, you still can't hear any knocking sound, especially if the exhaust is a bit noisy, so this isn't really even an issue.

I believe this came from one of those old wives tales, or maybe from times when old flathead engines were around because when one of those engines idled, they were dead quiet. For instance; one time out at Sonoma Raceway I was leaning against the window of a bone stock, original condition 40 Ford owned by the famed custom car builder, Roy Brezio. We had been talking for about 10 minutes or so when we said our so-longs and Roy put it into gear and drove off. It made NO sound at all and I had no idea it was even running because it was so quiet and smooth. I couldn't hear it and I couldn't feel it. That's how those engines ran... as smooth as glass. So maybe in an engine like that, way back in the day, when forged pistons and "hot rodding" were really becoming a thing, maybe they made a bit of sound that you could hear a little bit when the engine was cold, but certainly not these days. 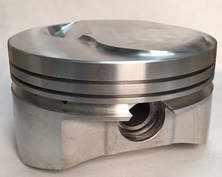 Another thing to consider is what prevents a piston from rocking in the cylinder to make a knocking sound IF you could actually hear it? The skirts. Different pistons have different length skirts. For instance, the piston in the image above is from an older blown alcohol engine we built quite a number of years ago that we used to run. It was a small engine (438 cubic inch big block Chevy), because big strokers back in the day just weren't as easy to build. Look at the skirts on it. They're long because the crank has a short stroke and smaller counterweights, and the rod is really short. Now days, with big strokers running super long rods (for better internal geometry), pistons are much shorter in the skirt area to allow clearance for the crank, such as what you see in the piston to the right for a 540 cubic inch big block. Notice how short the skirts on it are are compared to the piston in the above right image. You can also see the write pin location is a lot different because the 540 has such a long stroke compared to a short stroked 427 based engine. The 438 piston above has the wrist pin way under the oil ring, where the 540 piston to the right has the wrist pin right up and INTO the oil ring because the rods on an engine like that are so long. One nice thing about longer rods is they tend to want to push the piston UP the cylinder, not out the side. In other words, the angle of the rod is much less than a shorter rod engine, which prevents piston side loading and loss of ring seal, plus it cuts down on skirt wear and load.

So shorter pistons tend to rock in the bores a bit more than longer skirt pistons, but longer rods help to alleviate that a bit, BUT, with better alloys these days, a typical skirt clearance for a piston like this is more like .003" instead of the older days of .005" - .006". So again, piston rock and knock is very minimal, (even on short pistons), and really isn't something you can hear.