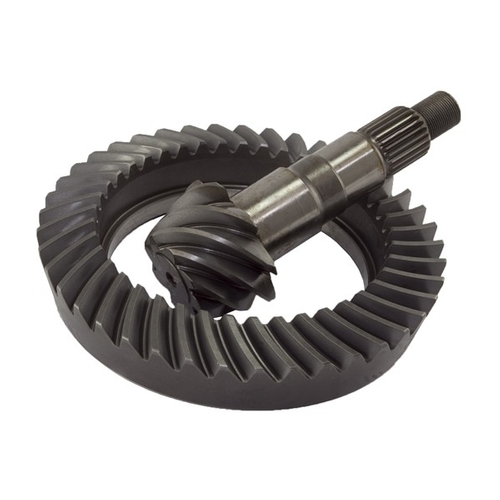 A lot of people don't understand the importance of rear-end gearing, or what kind of gears to choose for their particular vehicle, so I thought I'd take some time to try to simplify it so you can understand it better.

First off, regardless of what kind of engine you have or how much power it makes, gearing can make or break your car. In other words, having the wrong gear ratio can turn your car into a complete and utter turd, or it can make it lightning quick off the line but no with top-end speed what so ever.

So think of it like this, ride a 10 speed bike. Take off in 1st gear. That's a low gear ratio. You can go from 0 - about 5 MPH in a split second, do wheelies, ride up hills, etc quite easily. Now try to do the same thing in a taller gear, like 6th or 7th. Now you can't take off the line very fast, you can't do a wheelie, and you'll fall on your face trying to ride up a hill. It takes much more leg power to "pull" that taller gear, just like taller gears in a car need engines with more power (TORQUE, not "horsepower"), to pull those taller gears. If you want to cruse down the highway on your 10 speed bike, can you leave it in 1st gear? No, because your legs can't go fast enough to keep up as the bike goes faster. Short (low) gears work the same way. They require less power, and accelerate from a dead stop much quicker than taller gears, but you can't cruise very fast down the road without running out of leg RPM. Well, if you plan on doing a lot of freeway driving, you don't want to choose a gear that's too low for your car because you'll be going down the freeway at too high of an RPM.

Think of it like this; let's say you could only have 1 gear on a 10 speed bike. If you rode around town a lot, then something equivalent to 2nd or 3rd gear would be good to have so you can take-off from stop signs and accelerate quickly through traffic, but if you are going to be riding long distances along the highway, then something like 6th or 7th gear would be a better choice. You won’t be able to get-up and go from a dead stop very quickly, but you will be able to cruise along at 30 MPH pretty easily along the highway without your feet going round and round at 10 million miles per hour. Think of your feet as your engine and the bike’s gears as your car's rear-end gearing. Low gears like 1st, 2nd and 3rd will give you the gitty-up and go from a dead stop, and higher gears will allow you to cruise better at fast speeds.

With cars you need to pick a happy gear that works with your engine and driving needs. Smaller, high winding engines that make good “peak” power need lower gears or they will fall on their face. Big, torquey engines can “pull” taller gears easier and don’t need short (low) gears as much as a smaller engine does. No matter how powerful the engine is, if the gearing isn't low enough, it won't accelerate. Arnold Schwarzenegger couldn't do a wheelie on a 10 speed bike if it was in 10th gear, but an 8 year old kid can if it's in 1st gear. Cars and engines are no different. Just because you may have a powerful engine doesn't mean you'll be "quick" or will accelerate quickly if you don't have gears low enough. Race cars don't run super low gears for no reason. Even with VERY powerful engines, without the gearing, an 8 second drag car can instantly become an 11 second car.

Aside from engine size and power, you also have to take into consideration your tire diameter, transmission type and final drive ratio, the speed you’ll mostly be driving at (town or highway), and calculate the gearing from there. It may sound complicated but it isn’t really. On a 10 speed bike, do you have troubles figuring out which gear to change to as you go faster or slower? Car gearing is no different once you know the info and what to take into consideration. This is why good car builders always have quicker / faster cars than the average guy. They take the whole picture, (the car, engine, gearing, driving style, etc) into consideration so the car can perform as it is intended.

To make a point, if you took a bone stock V-8 car with say, 275 - 300 HP and put 4.88's in the rear-end and ran it against a car with a 750 HP race engine that has 3.00 gears in the rear-end, I guarantee you the bone stock car WILL out accelerate the race car from 0 - 60 MPH, just like an 8 year old kid on a 10 speed taking off in 1st gear will get-up and go to about 5 MPH or so quicker than a bike ridden by someone like Arnold Schwarzenegger could in 10th gear. A car's performance isn't solely related to just the engine's power. Gearing is every bit as important if you want it to go like it's supposed to.

When I was younger and was the "John Milner" of my town with the quickest car in the valley, a lot of people thought it was because I had such a bad ass engine in my car. Indeed for a small block it WAS a bad ass little engine, BUT what most people didn't know was hiding in my rear-end was a set of 4.88 gears. Without those I wouldn't have had a 10 second street car, it probably would have been more like a 12 or 13 second car.