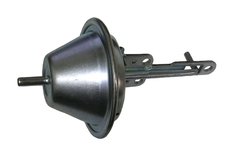 To many people, the vacuum advance is a mystery, when in reality, it's really quite simple. A vacuum advance affects timing by adding advance while the vehicle is cruising down the highway at part throttle to help increase fuel mileage and economy.

They don't normally run on what's called "manifold vacuum", but rather on ported vacuum, which is vacuum that comes-on only at part throttle, where manifold vacuum is pretty much only present at an idle or when the engine isn't under a load.

The thing that seems to confuse most people isn't so much as how a vacuum advance works, or why most engines have one on the distributor, but rather which vacuum port to hook one up to on the carburetor, and why.

As I said earlier, in most circumstances you hook it up to the ported vacuum nipple on your carburetor, which is usually one that is a little higher in location than the other ones because ported vacuum comes from above the throttle plates, not below like manifold vacuum does.

There are other times and circumstances where a vacuum advance might be hooked up to manifold vacuum. One reason might be for an engine that has a cam profile that's a bit too radical so it gives it idling issues, especially in gear if the stall converter doesn't have enough stall RPM in it.

Another time to do this is if you have an engine run-on problem, or what's commonly called "Dieseling", which is when your engine sputters and continues to kind of half-ass run after you've shut the key off.

99% of the time, Dieseling is caused by a carburetor that has the idle screw turned up way too high. I'm not saying that your idle itself is set too high. Your engine might barely be able to idle at all. What I'm saying is, your engine has issues with idling, and the only way you can get it to run is to crank down the idle speed screw, which in turn, opens-up the throttle plates (commonly called the "butterflies). By doing this you are getting off of the idle circuit inside the carburetor and are beginning to pull off the main jets and/or too much off the transfer slot. Either way, and for whatever reason, if the idle speed screw is cranked in too far just to get your engine to idle, it WILL Diesel because when you shut the ignition off, the engine is still spinning from inertia and is therefore still pulling-in air. If it's pulling-in air, then it's also pulling-in gas with it. If the engine is hot enough, or if you have carbon built up inside the cylinders, it tends to glow and acts like a glow plug, which lights a couple of the cylinders enough to keep the engine sputtering.

One remedy for this is to hook your vacuum advance up to manifold vacuum which will advance the timing at an idle much more than what your initial timing, or "idle timing" is set at. In return, the engine will idle much higher, which allows you to back the idle speed screw out a bit, which in turn closes-off those throttle plates so when you shut the ignition off, it can't pass enough air (or fuel) to allow the engine to Diesel. That's just a couple of he any functions a vacuum advance can do for you.

One quick note: some people will say that Dieseling is caused by your timing being off. With the key off... YOU HAVE NO TIMING! Timing is "ignition", as in electricity running through the distributor, coil, spark plug wires and down to the spark plugs. When they key is turned off, none of that electricity exists, so timing, whether too far advanced, or to far retarded, DOES NOT EXISTS.